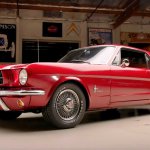 Leno met Mintz at a local cars-and-coffee event, where the Mustang caught his attention. Mintz got the car when he was just 14, saying he had always wanted a classic car. That’s thanks to the influence of his grandfather and grandmother, who owned a 1971 DeTomaso Pantera and 1968 Chevrolet Camaro, respectively.

His own Mustang, a notchback coupe, is powered by a 200-cubic-inch inline-6, which drives the rear wheels through a 3-speed automatic transmission. It’s been upgraded with a “sport” steering wheel and aftermarket air conditioning, probably a good idea in sunny California.

The car was drivable when Mintz acquired it, but still needed significant work. Mintz rebuild the ignition system himself, but got help on other parts of the car from his parents, and sent some work out to be done professionally.

Mintz said the body was in good condition when he got the car, but some rust repair was done, while keeping the original paint. He said the interior didn’t require much work either, although the speedometer and radio are new. All together, Mintz said about $12,000 went into restoring the car.

This isn’t the first “Jay Leno’s Garage” episode highlighting a young car enthusiast. Leno previously featured Brandon Fay, a young man in his 20s who restored a 1927 Ford Model T that had sat idle for three decades on a Wisconsin farm. That video is definitely worth a watch as well.