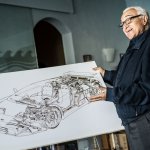 Bugatti is part of the Volkswagen Group of automotive marques, but it wasn’t VW that revived the famous brand 30 years ago. It was Romano Artioli, now 88 years old, who worked for nearly 40 years to make his dream of a new Bugatti come true.

“For decades, the Italian had dreamed of a modern super sports car – and this is what led him to revive the dormant Bugatti brand,” Volkswagen notes in a news release celebrating the 30th anniversary of the Bugatti revival.

“Romano Artioli is a part of our brand’s history,” Bugatti president Stephan Winkelmann is quoted. “It was thanks to his initiative and perseverance that Bugatti was revived. “Romano’s energy and enthusiasm, his irresistible passion for Bugatti, helped to transport the brand into the 21st century.”

VW notes that Artioli was born in Mantua, Italy, which also was the home town of famed racing driver Tazio Nuvolari. Artioli grew up fascinated by Nuvolari and other racers, and by the cars they drove.

He also told Classic Driver magazine that he knew at age 12, after reading a book about driver’s licenses, “that it was clear to me that my life would be dedicated to cars and engines.”

Artioli studied mechanical engineering and, as a post-war teenager, began repairing cars. He was 20 years old in 1952 when he heard that Bugatti would cease production after a run of six Type 101 models.

“He was shocked,” VW reports. “A brand of such superior quality, sophisticated design, ideas and technical achievement had to one day be revived. At that moment he vowed: ‘If no one reacts to the situation at Bugatti, I will work as long as it takes to one day bring the brand back’.”

From repairing cars, Artioli began importing them into post-war Italy. He started with cars from General Motors and Suzuki, and became Italy’s largest importer of cars from Japan. He also became the country’s largest Ferrari dealer, and he assembled a personal car collection that included several historic Bugatti models.

After it ceased production, Bugatti was purchased by Hispano-Suiza and then became part of the French national aerospace combine.

“By the mid-1980s, the Italian had begun to negotiate the sale of the brand with the French government – discreetly and concealed from public view for two years. In 1987, he founded Bugatti Automobili S.p.A. and became its chairman. Artioli wanted to resurrect the company in (the French town of) Molsheim.

“Molsheim is comparable to Maranello in Italy or Hethel in England,” Artioli said. “It is a Mecca for Bugatti, but at the time there were neither production halls nor engineers in the region.”

So, he launched the revived company from a modern production facility in Campogalliano, Italy, not far from where Ferraris, Maseratis and Lamborghinis are built.

“The site incorporates an administrative building, design studio, engine and test development area, production halls, test track, a stylish canteen and exhibition space,” VW reports. “The halls are open, bathed in natural light, and fitted with air-conditioning systems so that the employees feel as though they are sitting in the open air.”

Artioli’s cousin, architect Giampaolo Benedini, designed the buildings and test track at Campogalliano. Benedini also completed the design on the car that would be produced there, the EB 110.

“With the EB 110, we had to push the boundaries in terms of performance and quality,” Artioli is quoted. “I owed that to Ettore Bugatti. Production output was less important than uncompromising quality and innovation.”

“The EB 110 came into being on a blank sheet of paper, breaking with many of the conventions of its class and reaching the peak of automotive excellence,” VW reports. “It was to become the best and fastest super sports car in the world.”

The EB 110 debuted on what would have been Ettore Bugatti’s 110th birthday, September 15, 1991, during a special event in conjunction with the Paris Motor Show.

“Over 5,000 reporters and leading industry figures from all over the world, not to mention countless eager spectators, attended the premiere in Paris,” according to VW’s news release. “Several hundred security personnel were needed to safeguard the event on the Place de la Défense. All of the fans shrieked as French actor Alain Delon drove down the Champs-Élysées with Artioli’s wife Renata.

“The EB 110 featured the first series-produced carbon chassis, all-wheel drive, four turbochargers, and a 3.5-liter V12 engine with five valves per cylinder and a power output of 550 horsepower. With a top speed of over 351 km/h (218 mph), the two-seater broke multiple records.”

Among the first customers was Formula 1 racing star Michael Schumacher, “who had tested various super sports cars as part of a comparison test for a car magazine and had been particularly impressed by the EB 110, which he regarded as unrivaled.”

Schumacher ordered a yellow EB 110 Super Sport with blue interior, and Artioli recalled, “He did not ask for a discount – he was clearly a fan.”

While the rebirth of Bugatti was a success, Artioli had gone into debt investing in Lotus, and the Gulf War impacted potential customers, as did the sinking value of the Japanese yen. There also were problems with companies supplying parts to Bugatti.

“After 39 years of dreaming and seven years of hard work, the Bugatti project under Romano Artioli came to an end,” VW notes. “On September 23, 1995, after the construction of around 128 vehicles, he filed for bankruptcy. He paid his 220 employees up to the very last day.”

“It was a terrible day for all of us,” Artioli remembers.

But Artioli’s dream would be fulfilled, with Volkswagen moving production in 1998 to Molsheim, where Bugatti had built his first car in 1909.

The post How Bugatti was revived 30 years ago appeared first on ClassicCars.com Journal.