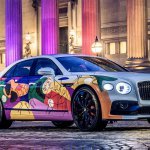 As European Diversity month concludes, Bentley has unveiled the “Unifying Spur,” a Flying Spur wrapped in an artist’s design inspired by the themes of “love, progress and unity.” The automaker also revealed its own plan to diversify management team.

“The 101-year old company is going through unparalleled change on its journey towards a climate-positive future,” Bentley said in its announcement. “Recognizing the fundamental importance of diverse experiences and perspectives to drive creativity and innovation, Bentley aims to become the most diverse luxury car manufacturer. To this end it has set a target of increasing diversity in management to 30 per cent by 2025.

To launch the diversity plan, Bentley assigned designer Rich Morris to create “a piece of four-wheeled art using the nine colors of the Progress flag. According to Bentley, Morris’ design “joins the words ‘Love is Love’ through a single, unbroken line, that traces faces, dancing figures and shapes – representing the unifying power of humanity, regardless of race, creed or sexuality.”