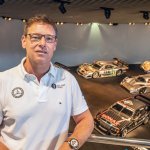 Bernd Mayländer is one of Germany’s best-known racing drivers, even if he has not been competing for victories and standings for some years now. Since 2000, as the driver of the official safety car in the FIA Formula One World Championship, he has always been at the heart of the matter when safety is required on race tracks around the world.

In this way, the racing driver from South Germany – together with the Mercedes-AMG GT R and, from 2021 on, also with an Aston Martin – makes a decisive contribution to reducing risk in Grand Prix racing events.

“If you add up all the many different aspects of my duties, I have actually found my dream job,” says racing driver Mayländer.

But that is not all: Bernd Mayländer represents the company as a Brand Ambassador at many events, such as the 1000 Miglia in Italy, and, as part of the AMG Driving Academy, trains the owners of the brand’s more powerful vehicles how to drive safely at the limit.

The safety car: By the time his birthday arrives on 29 May 2021, Bernd Mayländer will have been at the wheel in the safety car in 390 Grands Prix.

“In almost half the races I attended, I had to go out on the track,” he recalls.

On race Sundays, he is also on standby for all eventualities in Formula Two, Formula Three and Porsche Supercup races.

“I’m often in the car from 8.45 a.m. – with just a half-hour lunch break before the start of the Formula One race at 3 p.m.,” says Mayländer, who comes from Schorndorf, summing up his working day.

The race weekend on the track starts on Thursday for Bernd Mayländer as he inspects the track on foot to assess safety-relevant features such as kerbs and crash barriers. Later in the day, the circuit is exclusively available to the safety car for one hour.

“That gives me the opportunity to get up to speed on the track,” he says.

Close to the limit: When things come to a head, he goes all out. With the racing cars lined up behind him in a safety car phase like a string of pearls, Mayländer raises the pace to up to 98 per cent of his and the car’s capabilities. The main time differences between the 585 horsepower Mercedes-AMG GT R and the even more powerful Formula One racing cars are not so much in their top speeds, but in braking, acceleration and cornering speeds.

On average taken across all race tracks, the GT sports car is seven to eight seconds slower every kilometre than a Formula One racing car.

His most unusual job was also the longest Grand Prix in history. The race in Montreal, Canada, on 12 June 2011 lasted 4 hours, 39 minutes and 39.537 seconds due to numerous interruptions.

Mercedes-Benz has been providing the official Formula One safety car since 1996.

The early years: After gaining some experience at the wheel of various vehicles in the yard of his parents’ beverage shop in Schorndorf, Horst Mayländer and his son Bernd did countless laps of a go-kart track by Lake Maggiore. But they never participated in any races.

The day before his 18th birthday in 1989 – and having already passed his driving test – his father let him use his own Porsche 911 for some first laps on the race track at a club sporting event in France. As early as 1990, Bernd Mayländer was given a C-licence for car racing and participated in Formula Ford in 1991. In 1992, he took part in his first season in the Porsche Carrera Cup, which he won in 1994 as the youngest driver ever at that time.

As a Mercedes-Benz driver in the DTM: In 1995, Bernd Mayländer took part in the DTM (German Touring Car series) in a Mercedes-Benz C-Class for the Persson Motorsport team and collected his first points. The 1996 touring car season was held as the ITC (International Touring Car Championship).

The young driver started the season with Persson but moved up to the AMG team after an elimination race against Formula One driver Gianni Morbidelli. Mayländer finished many of the races with good results, but the DTM/ITC was temporarily discontinued after that season.

Norbert Haug, head of Mercedes-Benz Motorsport, and AMG boss Hans Werner Aufrecht entered the team in the new FIA GT Championship. In 1997, drivers Bernd Schneider, Klaus Ludwig and Bernd Mayländer won the four-hour Zeltweg race on the A1-Ring in the Mercedes-Benz CLK-GTR. At the end of 1998, Mayländer left the team and won the 24-hour race at the Nürburgring in 2000 in a Porsche 911 together with partners Uwe Alzen, Michael Bartels and Altfrid Heger, among many other successes. In the same year, he was runner-up in the Porsche Supercup.

Return to the DTM: In the second year of the new DTM, in 2001, Bernd Mayländer was back as a Mercedes-Benz works driver. Although he had to take a break for a few weeks after a good start to the season owing to a complex fracture of the right heel, which he had sustained taking a footpath a little too athletically before the race in Oschersleben, he won the season finale on 7 October 2001 at the Hockenheimring.

“The lap record for touring cars on the old circuit is mine for all time,” he enthused.

The reason was quite simply that the reconstruction of the traditional race track in Baden started on the Monday after his win. At the end of 2004, Bernd Mayländer retired from the DTM to concentrate on his new role as safety car driver in Formula One and as a Brand Ambassador for Mercedes-Benz.

The Brand Ambassador: “It’s a multifaceted job. I really enjoy driving the historic Mercedes-Benz racing cars, for example, or taking part in the 1000 Miglia,” he explains.

All his activities together in Formula One, as a Mercedes Brand Ambassador and as an instructor at the AMG Driving Academy take up a lot of time.

But in between, there are days and weeks with the family when he enjoys taking care of the twin boys born in 2018.

He has one wish, even at 50: “I am sure that I will stay in motorsports for many further years. In whatever form. I still love the job as much as on the first day. ”