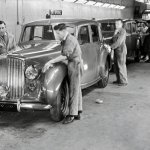 Bentley has been building its vehicles at Crewe in the UK for so long you might not realize that until 1946, its production was done at Derby. While not forgetting its roots, Bentley this month celebrates the 75th anniversary of the opening of its factory in Crewe.

It was in May of 1946 that the first car, a Bentley Mk VI, rolled off the production line in Crewe. Since then, 206 models and, as of the official anniversary date of May 21, 197,086 cars have been hand-built at the plant on Pyms Lane, representing 97 percent all Bentley production.

Current production is 85 cars a day, Bentley reports, adding that its Crewe facility is “the world’s only carbon-neutral luxury car factory.”

“Remarkably,” Bentley adds, “records show that 84 per cent of all cars built in Crewe for the UK market are still on the road today, with that number growing at unmatched levels. Bentley is currently building 85 cars per day; one month’s output, two decades ago.”

“For 75 years, Crewe has been synonymous with luxury car manufacturing – a global showcase of craftsmanship and quality,” Peter Bosch, Bentley board member overseeing manufacturing, is quoted in the company’s announcement. “In that time, our colleagues have produced some of the world’s most iconic and desirable products, including cars for global royalty and unique personal commissions.

“Beyond bricks and mortar, this milestone pays homage to the colleagues who have built our brand in Crewe, and I’d like to express my thanks and admiration for their dedication over three quarters of a century.

“With our most recent investment we have transformed our historic factory into a collaborative modern campus; a carbon-neutral, innovative, low environmental-impact site that retains the best of our heritage while looking strongly to the future.  In many factory areas, modern, digitized production systems complement traditional craftsmanship skills employed on our cars since 1946.

“As we cautiously emerge from the pandemic, we look forward to welcoming our customers back to Crewe to experience our unique factory and meet our colleagues in person.”

Although Bentley has been building cars at Crewe since 1946, the site was transformed in 1938 from potato fields to a manufacturing base for Merlin aircraft engines for the war effort. After the war, the company’s former Derby auto plant was used to build jet engines and Crewe was converted to auto production with new paint, woodwork and body facilities among the changes.

“Arguably the biggest change to Pyms Lane, Crewe, took place in 1998, following the acquisition of Bentley by the Volkswagen Group,” the company notes. “The Group immediately invested significantly to modernize the factory and transformed the company into the one that exists today, creating a platform for an illustrious period in the history of Bentley Motors.”

The latest additions at Crewe are an engineering test center and new research and development building, both opening soon.

Bentley is moving toward gas-electric hybrid power for its cars and by 2030 plans to produce only battery-electric vehicles.