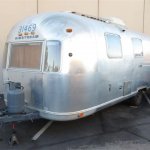 There are few vehicles more iconically American than an Airstream camping trailer. Sure, to go you have to tow, but whether you have a brand-new pickup or a resto-mod classic truck, you’ll be going in style.

The Pick of the Day is a 1973 Airstream Land Yacht being advertised on ClassicCars.com by a dealer in Tempe, Arizona.

“This very cool all original 1973 Airstream was just traded in by an older couple who owned it since new!” the dealer reports.

“They had a ton of fun and long years of memories of California road trips and trips down Baja Mexico.

“Original aluminum is overall good condition with some sun damage up top. Also, some tire blowout damage on both sides behind the wheels but easily repairable.

“All glass is watertight and crack free. The interior is completely original and ready for a clean vintage preservation or make it your own and modernize the interior.”

The dealer adds that the RV’s smaller size means it can be towed “by most V8 vehicles.”

Airstream is the creation of Wally Byam, who was born on the Fourth of July in 1896 and was the grandson of pioneers who traveled West on the Oregon Trail in a mule-drawn wagon. His wife didn’t enjoy tent camping so Byam created an alternative, putting a tent atop a Model T chassis in the late 1920s.

Unhappy with the result, a teardrop-style shelter replaced the tent. People who saw the new trailer liked it and Byam published DYI plans in Popular Mechanics magazine and started building examples for sale. By 1931, he opened a small trailer-building company in Culver City, California.

During World War II, Byam went to work at Curtis Wright Industries, building aluminum-bodied aircraft. After the war, Byam applied his new skills back into building travel trailers, which he promoted not only across the country but with caravans around the world.

The Pick of the Day is offered for $22,900 and can be viewed on ClassicCars.com.

The post Pick of the Day: Airstream trailer is an American icon appeared first on ClassicCars.com Journal.