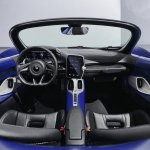 Because some customers have asked for it, and largely because a windshield is required in some states of the US, McLaren Automotive has announced it will produce versions of its Elva roadster with a conventional windscreen rather than using the Active Air Management System unveiled with the car back in 2019.

“Super-lightweight and extremely powerful, the Elva delivers the ultimate connection between a driver, the road and the elements,” McLaren chief executive Mike Flewitt is quoted in the recent news release. “Created to celebrate the pure joy of driving, it’s one of the most distinctive – and exclusive – cars we have made.

“Roofless and without windows, whether you opt for the screenless model with its sophisticated AAMS technology that provides an invisible barrier of air, or the windscreen version with an additional level of enclosure, this is a roadster that rewards owners with the most exhilarating of open-air driving experiences, delivered as only a McLaren can.”

McLaren said the Elva with a physical windshield “shares all of the ethos and performance of the original car: neither has a roof, side windows or rear screen, which when combined with a dry lightest weight of less than 1,300 kilograms (2,860 pounds) and a mid-mounted, 815 horsepower, twin-turbocharged 4.0-liter V8 engine, delivers the ultimate in driver exhilaration.”

Installing the heated windshield, which includes rain-sensing windshield wipers, washers and sun visors, adds only 20 kilograms (44 pounds) to the car’s weight, McLaren said. The Active Air system is deleted from Elvas with windshields.

“Dynamic performance (0-62 mph in 2.8 seconds and 0-124 in 6.8 seconds) and vehicle stiffness also remain unchanged from the screenless car,” McLaren added.

Delivery of Elvas with windshields begins late this year.