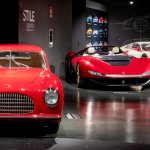 The Museo Nazionale dell’Automobile di Torino – the MAUTO in Torino, Italy — has opened a special exhibition, “La Forma del Futuro” (The Shape of the Future), featuring 16 vehicles by Pininfarina, the design company celebrating its 90th anniversary. The exhibit runs through September 12.

The museum designed the exhibit to showcase “Pininfarina’s innate ability to envisage the future and give it form by staying ahead of the times and setting trends.”

Featured are research prototypes, concept cars and one-offs “testifying to the genius expressed by the world’s most=famous Italian design house over three generations and more than 90 years of history, with an approach to design that, by combining style and function, has left its signature on the evolution of the motor car,” the exhibit news release notes.

The exhibit includes a smartphone audio program through which Pininfarina chairman Paolo Pininfarina shares notes on the vehicles displayed.

“On an anniversary of such importance for our company, which we are celebrating at the MAUTO a year late because of the health emergency, we look back on our journey by focusing on masterpieces that, each in their own way, have represented a leap forward in car design,” Paolo Pininfarinia is quoted in the museum’s announcement. “Design is able to constantly enrich people’s lives and provide the foundation on which to imagine a new future. This is our mission, and it will remain so for the next 90 years.”

Pininfarina was established in 1936 by Battista “Pinin” Farina, and the company’s work became so respected that the president of Italy changed the family name to Pininfarina in response. For many years, the design workshop was led by Farina’s son, Sergio Pininfarina, and later by his son, Andrea, who died in a collision between his motor scooter and a car, and was succeeded by his younger brother, Paolo.

Go over the edge with NASCAR Hall of Fame

You aren’t likely to find your way into a NASCAR race car and be terrorized by the thrills of racing around the high banks. But the first 100 people to make a $1,000 donation to the NASCAR Hall of Fame Foundation can experience another sort of thrill by going Over the Edge.

Oh, that’s Over the Edge as in rappelling down the side of the 10-story Embassy Suites Charlotte Uptown hotel in the North Carolina home of the Hall of Fame museum.

The 20th annual Star City Motor Madness, a two-day cruise-in and car show, is scheduled for June 25-26 in Roanoke, Virginia, and is a fund-raiser held in support of the Virginia Museum of Transportation, which includes not only an automotive gallery car collection but an array of railroad rolling stock and other artifacts of transportation history.

The Lane Motor Museum in Nashville, Tennessee, opens its new exhibits. One is “Recipe for Speed: Open-Wheel Racing” and the other is “RADwood on Display,” featuring cars, motorcycles and fashions from the 1980s and ‘90s.

May 29 is the date for the Mustang pace car show from 10 a.m. until 2 p.m. at the Mustang Owner’s Museum in Concord, North Carolina.

The National Corvette Museum in Bowling Green, Kentucky, unveils a new exhibition, “Corvette Powered,” during the Memorial Day weekend. The exhibit will showcase non-GM vehicles (cars, boats and motorcycles) powered by the Corvette’s small-block V8 engine, including a 1958 Scarab, 1966 Excalibur, 1967 Bizzarrini Strada, 1977 Avanti II and others.

The Petersen Automotive Museum in Los Angeles plans to host a virtual Japanese Car Cruise-In at 8 a.m. (Pacific) on May 30 on its YouTube channel.

The California Auto Museum in Sacramento hosts a Memorial Day car show from 10 a.m. until 1 p.m. on May 31.

The California Auto Museum in Sacramento beings a docent training program June 2 with 20 sessions offered through September 22. The course includes the history of the automobile and various domestic and imported brands, practice sessions of “hands-on” docenting, and includes trips to the Blackhawk Collection in Danville and to the National Auto Museum in Reno. The cost is $99.

The North East Motor Sports Museum in Loudon, New Hampshire, launches its 2021 outdoor events calendar June 5 with a showcase by the New Hampshire Muscle Cars, with visitors offered a chance to sit inside a 1,400-horsepower funny car during start up.

The Museum of Bus Transportation at Hershey, Pennsylvania, hosts its Spring Fling on June 5 to celebrate the “golden age” of bus and motorcoach transportation. Awards will be given for best of show 1950s and 1960s, oldest and traveled farthest to attend. For details, visit the museum website.

Strutter, billed as the nation’s premiere KISS tribute band, will perform on the Gilmore Car Museum campus in Hickory Corners, Michigan, at 8 p.m. (Eastern) on June 5.

John Oreovicz will present his book, Indy Split, from 10 a.m. until 2 p.m. on June 5 at Autobooks-Aerobooks in Burbank, California.

Hagerty and the Automotive Hall of Fame in Dearborn, Michigan, launch a summer series of events with a series of displays in the museum and its parking lot on “the many styles of auto racing.”

June 12 is Motorbike Day at the AACA Museum in Hershey, Pennsylvania. The event will include a show featuring dirt, road, competition, scooters, mopeds and minibikes, a motorcycle-themed flea market and a ride through the Pennsylvania countryside.

The Indianapolis Motor Speedway Museum hosts a cars & coffee cruise-in and free museum admission from 8 a.m. to 11 a.m. on June 12.

The AACA Museum in Hershey, Pennsylvania, will host a “Sizzlin’ Summer Cruise In” from 8 a.m. until 2 p.m. on June 19. Among the event features will be a visit by Jimmy Rosen, his book on vintage gas stations, Got Gas?, and his 1947 Plymouth, and a Studebaker and Tucker parade.

There are more than cars to see in Beaulieu, England, home to the National Motor Museum. From June 19 to August 30, the Beaulieu Palace House will showcase more than 250 sculptures in its gardens and inside the Montagu family home. And June 19 is the date for the annual Simply VW show.

The Lane Motor Museum in Nashville, Tennessee, not only offers free admission for dads on Father’s Day, June 20, but free Vault tours as well. The museum also will have three local food trucks on side that day — Steaming Goat sandwiches, Coco’s Italian pizza and Bradley’s Creamery ice cream.

Beaulieu and its National Motor Museum and the Solent Renegades club co-host a Hot Rod & Custom Show on June 20.  The event includes the Vintage Pop-Up marketplace with retro fashions, housewares and automobile accessories.

Van Halen 2, a tribute band, will perform at 8 p.m. on June 25 on the Gilmore Car Museum campus in Hickory Corners, Michigan. Funds from the $20 admission charge go toward K-12 educational tours of the museum and the Gilmore Garage Works high school training program.

The British Motor Museum at Gaydon hosts the BMC & Leyland Show on July 11, a gathering of British Motor Corporation, British Leyland and Rover Group vehicles. Celebrated this year are the 50th anniversary of the Morris Marina, a Historic Rally Display by the Historic Marathon Rally Group and the Mini Cooper Register, and a display of emergency service vehicles.

It’s “Simply Vauxhall” on July 17 at the National Motor Museum in Beaulieu, UK, where Vauxhall vehicles will gather for a show.

The inaugural North East Motor Sports Museum rally-tour Around the Lake is scheduled for July 31. The event begins at the museum in Loudon, New Hampshire, and will take scenic roads to the Vintage Racing Stables car collection in Sanbornton. the event is limited to 1972 or earlier vehicles.