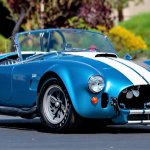 Dana Mecum’s plus-size collector car auction in Indianapolis lived up to the hype last week, with overall sales of $107.8 million, scoring an Indy record and the second time this year that a Mecum auction has exceeded nine figures, an industry first.

There were 2,057 vehicles offered during the nine days of the sale, with 1,715 of them sold, for a strong 83 percent sell-through rate. Seven of the highest-selling vehicles went for more than a million dollars.

“While this certainly isn’t the first time Mecum has broken the $100 million mark with a singular auction event, it is the first time we’ve done it with our flagship auction in Indianapolis and the first time any collector car auction company has done it twice in one year, which makes it an accomplishment that we are especially proud of,” consignment director Frank Mecum said in a news release.

While much of the attention preceding the auction with on the Parnelli Jones off-road racing legend, the 1969 Bronco known as Big Oly, the top-selling car was a different performance icon, a 1967 Shelby Cobra 427 S/C roadster.  One of just 29 “Semi-Competition” Cobras built, fully restored and driven just over 10,000 miles total, it achieved $3.3 million (all results include auction fees), which was finalized in a post-auction negotiation.

Following the Cobra was a hometown native, an elegant 1930 Duesenberg Model SJ Rollston Convertible Victoria that was built in Indianapolis and brought $2.97 million.

Big Oly landed in third place with a $1.87 million sale in a tie with another terrific Ford, a 2020 Ford GT MkII boasting just 15 miles and wearing one-off Ken Miles livery.  Parnelli Jones, one of the best-known American racers of all time, was on-site for the sale of Big Oly and other items from his personal collection, which brought a total of $3.15 million.

Among the more than two-dozen private collections on the Indy docket, the six red-on-red vintage Corvettes from the Mark Davis Collection achieved a total of $1.05 million, while the 145-vehicle collection from the Charlie Thomas Estate sold for $6.67 million, and the 26-car, no-reserve collection from Marshall Goldman reached $6.59 million.

More than 2,700 Road Art automobilia items were offered at the Indy auction, with 2,628 sold. The top sales included a Miles Ahead Carroll Shelby statue that sold for $41,300, a Ford double-sided porcelain neon sign that brought $35,400, and the Big Oly race-worn helmet and goggles from the Parnelli Jones collection that sold for $25,960.

The top 10 collector car sales at the Indy 2021 auction were:

Mecum Auction’s next sale is its debut event in Tulsa, Oklahoma, on June 11-12 with 600 collector vehicles expected.