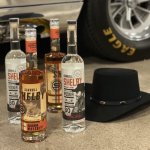 The last thing we want to encourage is drinking and driving, but we do feel an obligation to inform the many fans of Carroll Shelby and his cars that a licensing deal has produced the Carroll Shelby Collectible Spirits, which are available, we’re told, “through select locations in the Western United States.”

The spirits are available in “select locations in Oregon, California, and Las Vegas.”

“Carroll Shelby has ascended from automotive icon to pop culture legend,” Glacier45 chief executive Ryan Chaves is quoted in the announcement. “His legacy as an automotive designer, racecar driver, entrepreneur and author has created a massive fandom over that past six decades. Glacier45 Distillery received a license from the company that he founded to give all those fans another way to celebrate Carroll Shelby through a line of premium spirits that reflect his passion for performance.”

“Carroll Shelby and his racing team celebrated their victories with almost as much vigor as they did earning them,” added Neil Cummings, chief executive of Carroll Shelby Licensing.“Having spent decades working closely with Carroll, I’m confident he would love the quality of the new premium bourbon whiskey and vodka. Both were crafted and perform to a level that would meet his approval.”

“The Carroll Shelby Bourbon Whiskey is a special twist on Glacier45’s bourbon recipe,” according to the news release. “It was specially made to be 98 proof as the number 98 was Shelby’s personal racing number used on multiple race cars that he drove and built over the years.

“The Carroll Shelby Vodka is a unique blend from Glacier45’s award-winning vodka line. This 80 proof Vodka is distilled with the highest quality non-GMO/Kosher corn, making it naturally gluten-free.”