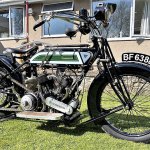 The only known surviving 1914 Sparkbrook Vee Twin motorcycle will be auctioned June 9 during the H&H Classics sale at the National Motorcycle Museum in the West Midlands, UK.

The Sparkbrook was restored to “show-winning standard” about a decade ago, H&H says in a news release, and was used in many vintage-vehicle events until a few years ago.  The motorcycle last run in 2019 and will need some recommissioning before being used again, the release says.

“This is a handsome and very usable veteran machine,” Mike Davis of H&H Classics says in the release.

Another rare veteran in the motorcycle sale is a 1920 Nut Model TT that has been under current ownership by a Nut marque specialist since 1962, and was restored in the 1980s to an exacting standard emphasizing originality, the auction company said.  It was last ran about five years ago.

“It was purchased by the vendor in 1962 for £35.00 (about $50) and was then professionally restored in the 1980s to concours standard, with paperwork for work carried out,” the release says. “The work was carried out using all original parts and detailed attention to the correct electrical equipment.”

“It has been used on many rallies and VMCC tours until 1995, last run five years ago. It requires light recommissioning before use.”