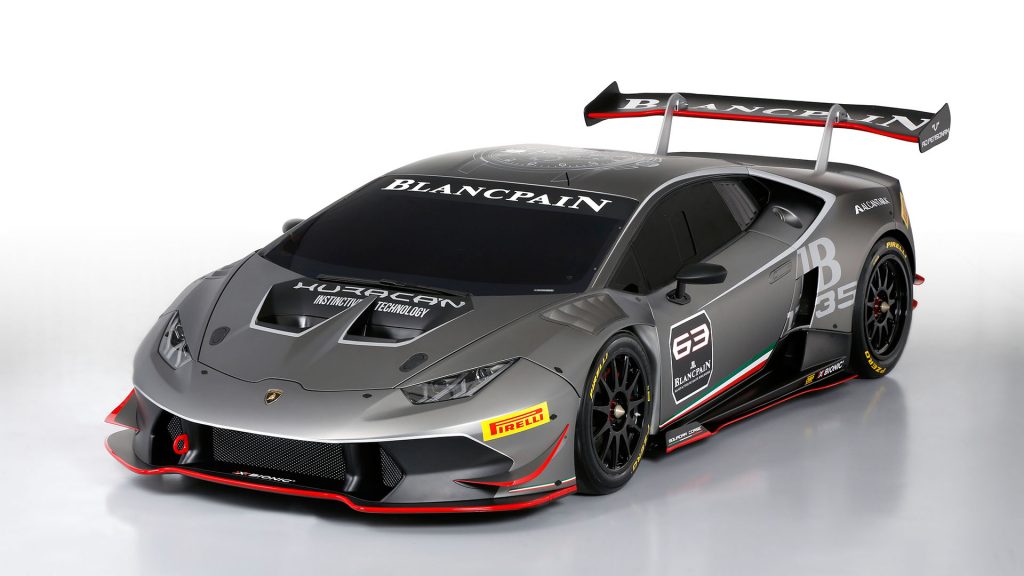 Automobili Lamborghini SpA unveiled the Huracán LP610-4, the successor to the popular Gallardo, to the public back in March 2014 at the famous Geneva Motor Show, a V10 powered Raging Bull with 610 hp going to all four wheels, hence the LP610-4 designation, only a few months later the Squadra Corse department had a race version ready for this new V10 to take over the reign from the MY2013 Gallardo Super Trofeo.

During the 2015 Lamborghini Blancpain Super Trofeo season in Europe, North America, and Asia, the Gallardo would still be eligible, but it would have to compete next to the brand new Huracán Super Trofeo that made its Global Debut at “The Quail, A Motorsports Gathering” in August 2014 as the LP620-2, only 10 more hp compared to the street version of the new Huracán, but with rear-wheel drive only. The Lamborghini Super Trofeo one-make series was already a success with the Gallardo, but when the Huracan took over, things really started going well, it wasn’t long until they added an in-house developed Huracán GT3 race car, effectively putting Reiter Engineering GmbH who developed the Gallardo GT3 aside, the Squadra Corse department grew up, and only three years later, in September 2017 they came up with the first evolution of the Huracán Super Trofeo car … and called it the Super Trofeo EVO, a massive redesign turned the V10 into an extremely aggressive looking car (the GT3 version got the EVO suffix too by the way), and another important change was the replacement of Blancpain for Roger Dubuis. 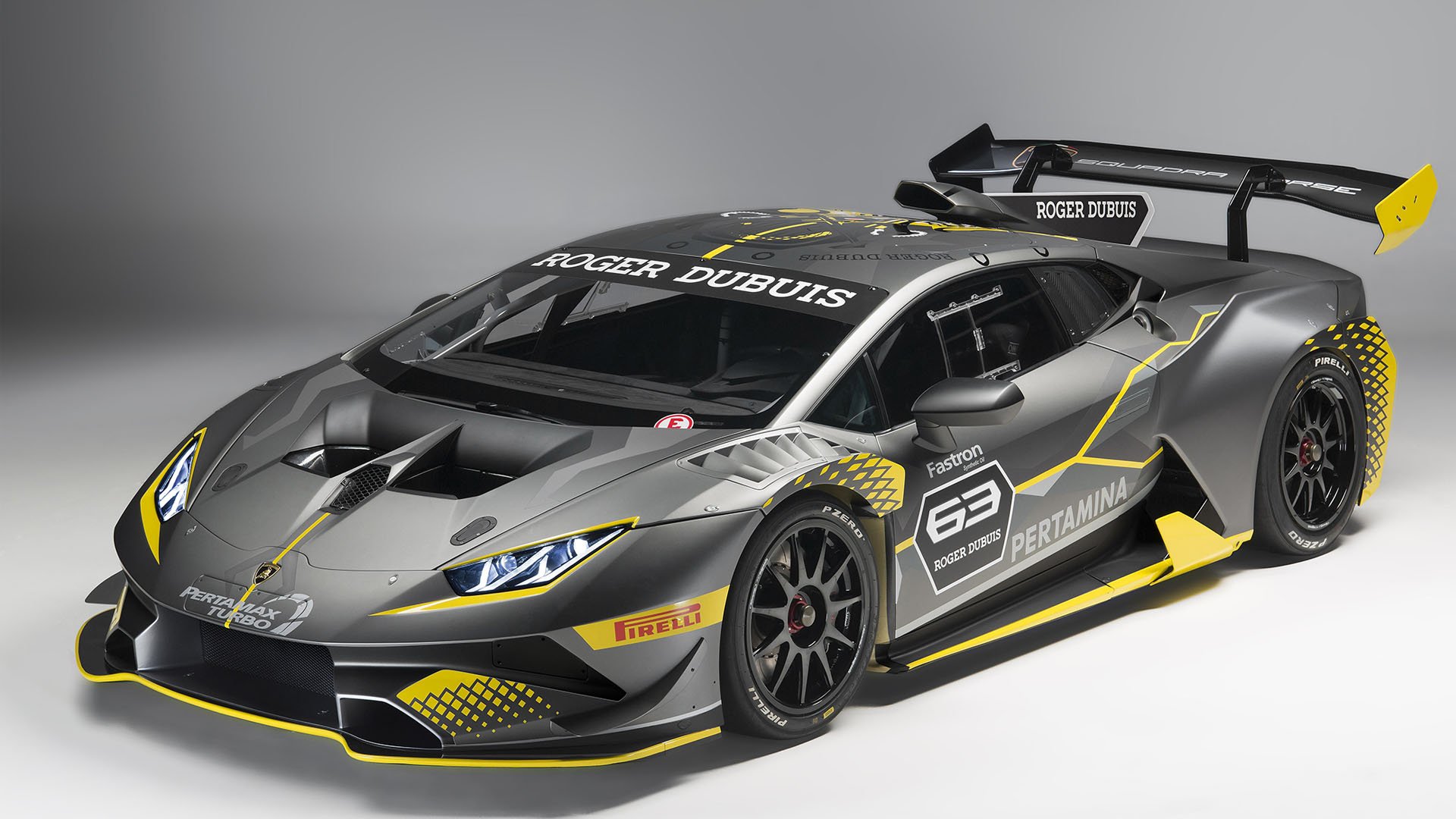 Another four years later, and after more than 400 Lamborghini Huracán race cars have been produced, Squadra Corse apparently deemed it necessary to evolve the successful one-make racer again for the 2022 season … and call it the EVO2, we might have a word with the department that comes up with these names … I’m sure they could come up with something more interesting than ‘EVO2’ for this brand new Bull for the track.

A small detail, but very interesting, the Lamborghini Huracán Super Trofeo and GT3 race cars are actually built on the same assembly line as the regular streetcars, it must be cool to visit the factory and see one of these ultra-aggressive looking Super Trofeo EVO2 cars between an Huracán EVO coupe and an EVO RWD Spyder … the contrast must be mindblowing seeing those together.

The new Lamborghini Huracán Super Trofeo EVO2 will be seen in action during the 2022 season, which will the 14th season of the series, and this version of the Huracán ST is the most high-performance one ever to race in this one-make series, it is safe to say the Lamborghini Huracán model is the best-selling sports car ever for Lamborghini since 1963, and the option to have gentlemen racers and professionals battle it out on the track in the Super Trofeo series has surely helped to reach unseen production numbers for this ‘Baby Lamborghini’. 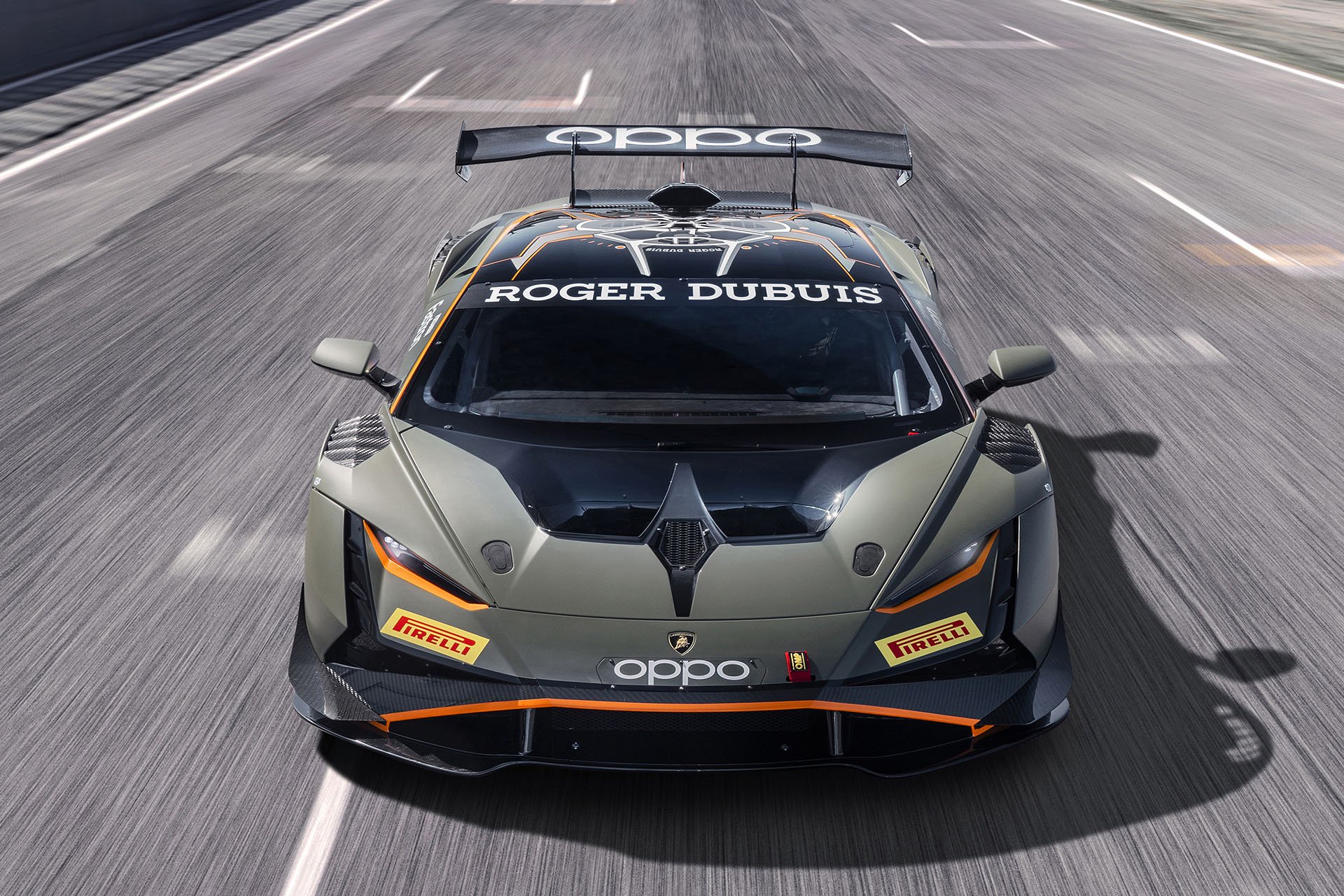 From the start of the Super Trofeo championship in 2009, a total of 950 drivers have competed for over 310 hours on famous track all over the globe, and the experience gathered from racing these bespoke Huracán to the limit on the track had surely helped the development of the road cars too, it’s a win-win situation for both venues, and with a total of 400 pure race cars built up to April 2021, the intention is to reach the 500 units mark with this new Huracán Super Trofeo EVO2 that is available for €250,000 before taxes, and just in case you already own the ‘old’ Lamborghini Huracán EVO version, there is a conversion kit available in early 2022 to EVO2 specifications, we will see the EVO2 in action on May 28 at Le Castellet, during round two of the Lamborghini Super Trofeo Europe. 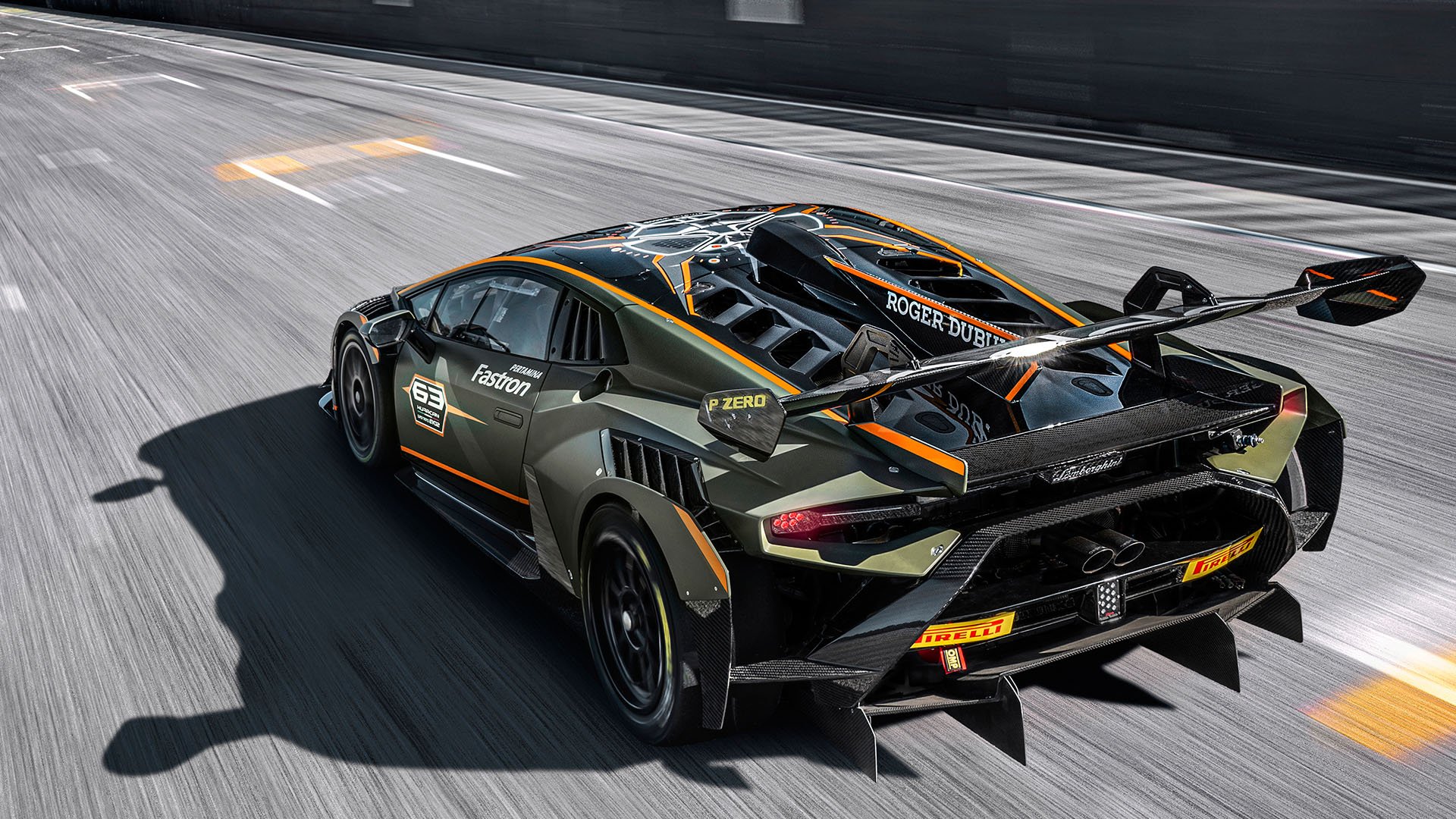 When we take a closer look at the new Huracán Super Trofeo EVO2 we notice some Sian influence at the front, with the open fender next to the new, high-intensity LED headlights, the overall design of the new front bumper resembles the Huracán STO road car, the vents above the front wheels extract air from the hot disk brakes, but also direct air to the side sills, adding downforce at the same time as creating an airflow into the intakes for the rear wheels. 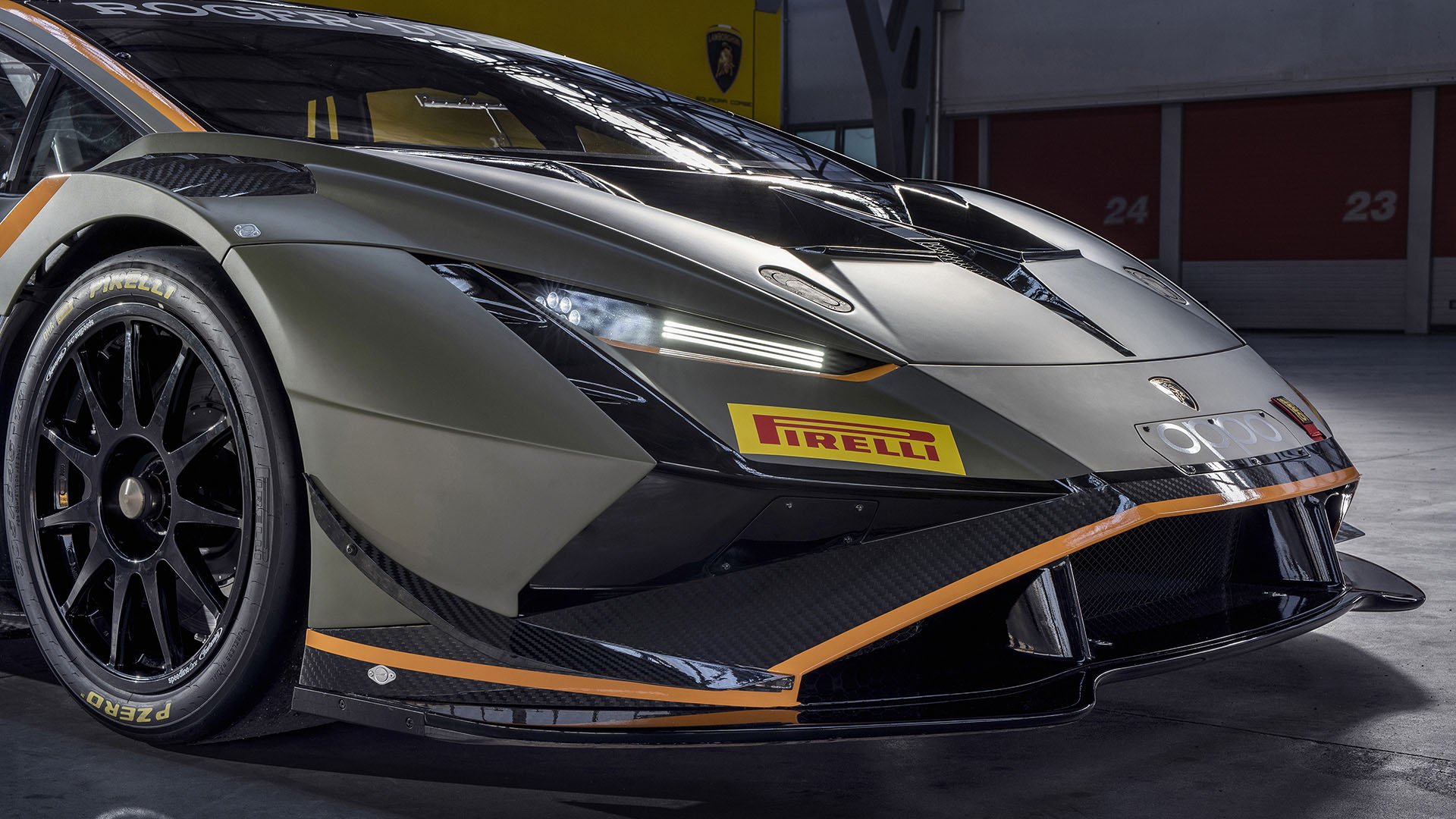 At the rear, we also notice new LED taillights, according to the press release they remind us of the legendary Lamborghini Countach, but our attention gets drawn to that intricate rear diffuser, and that massive, imposing, clear carbon fiber rear wing, it is clear from every angle this car was developed for optimal airflow, there are a lot of vertical fins to be found everywhere on the body of this Huracán Super Trofeo EVO2, I’m sure this car will be rock stable at tremendous speeds with this kind of aerodynamics. 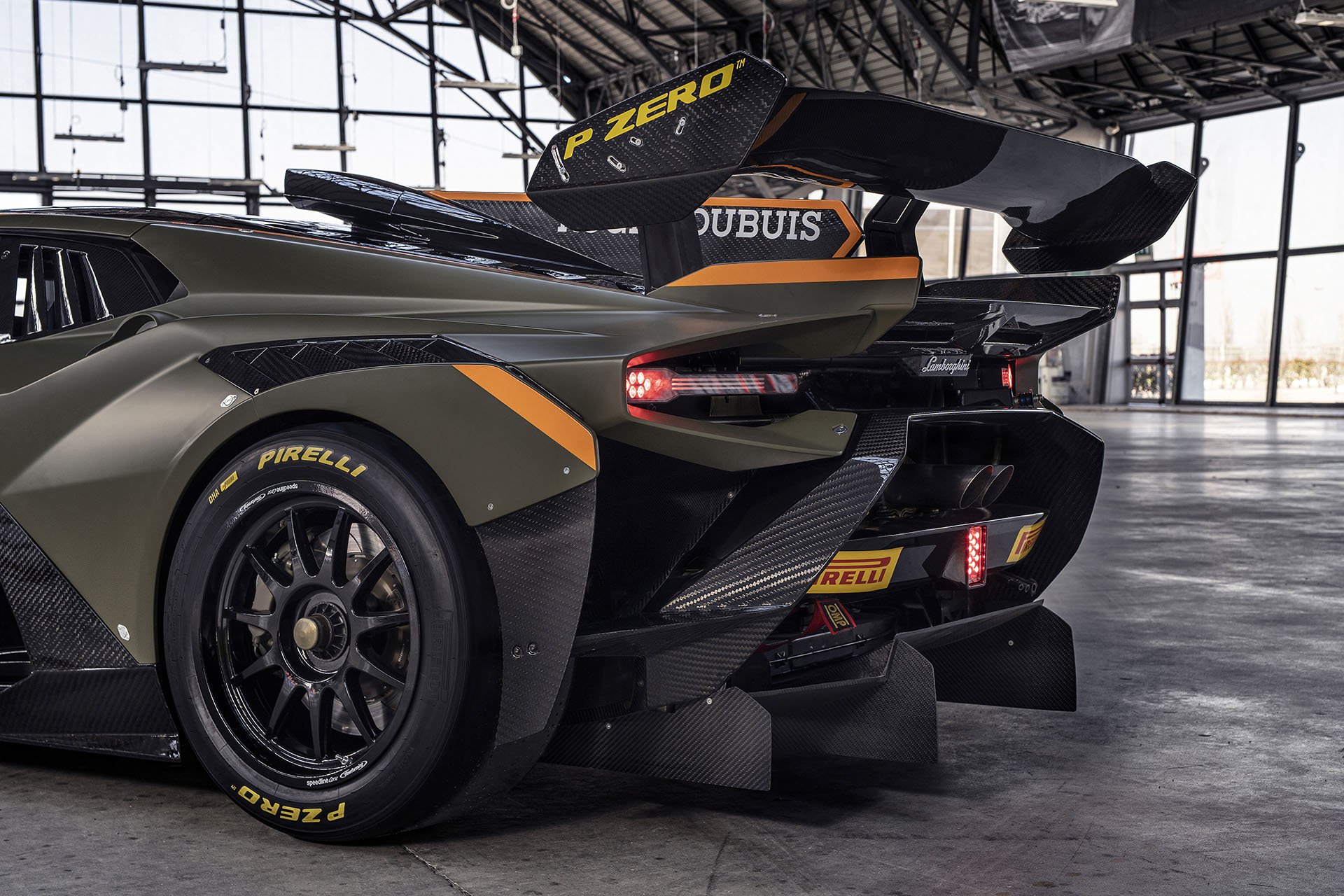 And it not only a cosmetic change that distinguishes the Huracán Super Trofeo EVO2 from the previous EVO version, on this new model the front brakes go to 390 mm rotors compared to the 380 mm units on the previous model, but this also allows the use of larger brake pads for better performance and wear. The engine is still the naturally aspirated 5.2-Liter V10 unit with 620 hp going to the rear wheels only through an X-Trac sequential six-speed gearbox. 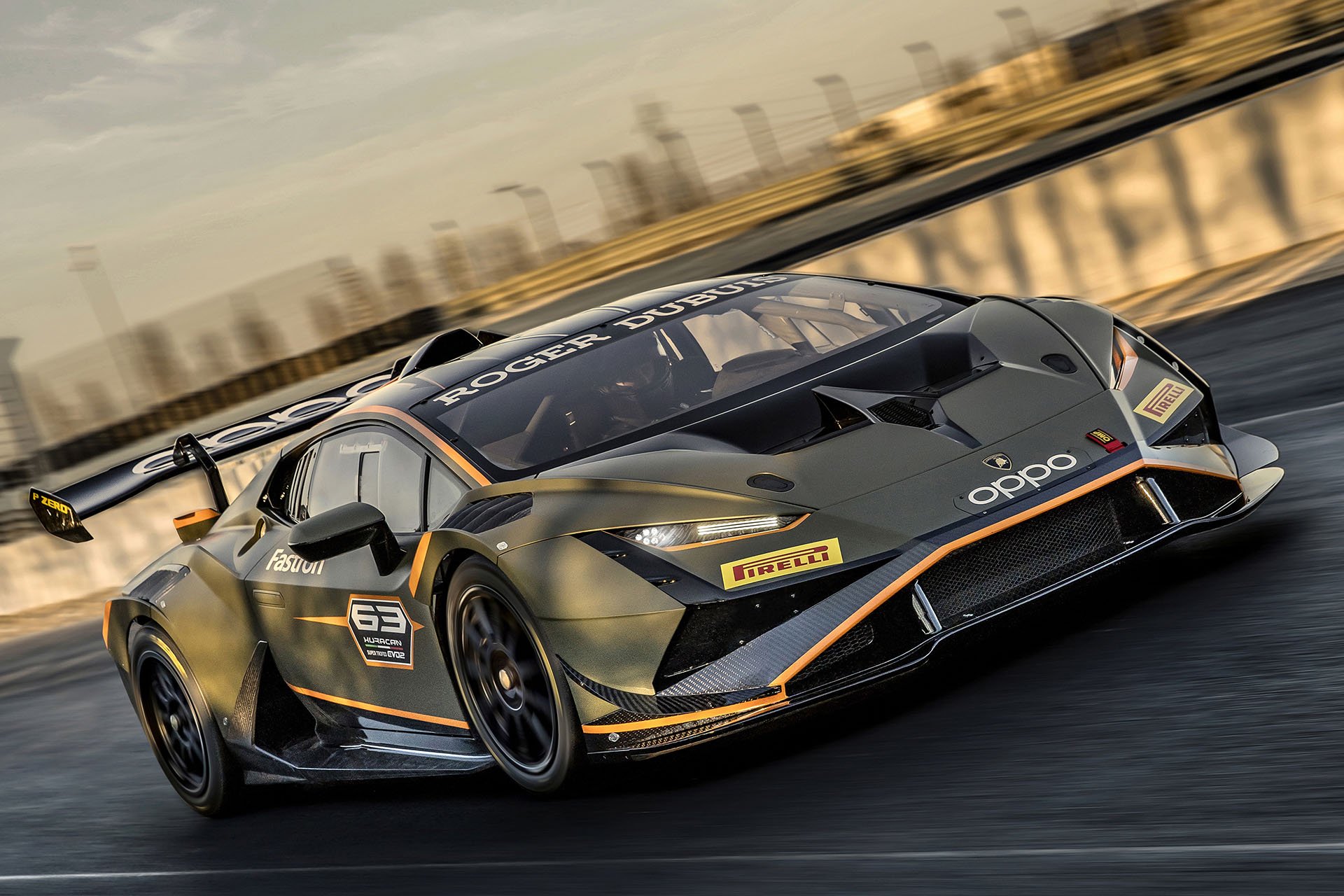 Giorgio Sanna, Lamborghini’s Head of Motorsport, stated: “The Super Trofeo is the basis of our concept of customer racing, capable of involving and exciting both young talents and gentlemen drivers. The Huracán Super Trofeo EVO2 is dedicated to both categories of drivers, and we have designed it with the precise aim of offering an even more engaging driving experience while paying the utmost attention to running costs”.