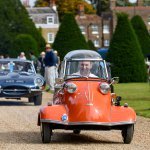 Worried that more than 100,000 jobs “are in peril” just as the collector car industry in the UK is trying to recover from the coronavirus pandemic, a group of people involved in the hobby have joined together under the banner of the Historic and Classic Vehicles Alliance trade group.

The group’s mission is “to protect and promote the sector and secure its long-term future” despite what it sees as “as a combination of bureaucracy and poorly focused environment legislation (that) threatens Britain’s world leading classic vehicle industry.”

The group said that leaders in the classic vehicle industry “fear complex new rules around exporting and importing cars and parts to and from the EU and widespread misunderstanding of the environmental impact of vintage motoring are damaging owners’ confidence and enthusiasm.”

They add that those working at collector car businesses, including engineers, craftsmen and parts suppliers, “face uncertainty over their livelihoods.” The new group is calling on Britain’s politicians and regulators “to use their post-Brexit regulatory independence to help grow this valuable sector of the economy” rather than to work against it.

Thus the not-for-profit organization will be campaigning “on behalf of individuals and companies in the classic vehicle world including specialist restorers, dealers, parts suppliers and a broad cross section of the multi-billion-pound industry.

“The sector’s contribution to the UK economy is huge,” the news release reports. “Annual turnover including substantial international trade is estimated at £18.3 billion, the three-million-strong British classic fleet is valued at over £12 billion and annual tax revenue generated for the exchequer is close to £3 billion.”

“Our sector is a great British success story and has been for decades,” HCVA director Harry Whale, former executive at Aston Martin Racing and then at Silverstone Auctions, is quoted in the news release. “But it’s in serious jeopardy and may not survive to continue providing opportunities for future generations if we don’t act now.

“In a world of mind-boggling bureaucracy, with environmental and other legislation looming, we need to ensure the voice of the industry and owners is heard and understood by regulators and those in power.

“We’re taking the initiative now to address current challenges, clear up confusion and grasp opportunities to find solutions. These problems span the world and we’re determined to take a long-term view as we campaign to secure the future.”

“It is so important that conditions are created that allow us to develop training programs, support skills transfer and boost diversity.”

Commenting on the future of the hobby, Crickmay noted that she once was a child fascinated by seeing vintage vehicles gliding by and now she’s become an enthusiast working to keep them on the roads.

“We are very keen to see a boost in apprenticeships,” she said, “it’s investment in the future. There is a passion, enthusiasm and devotion to the craftsmanship, materials and traditional skills of the individuals who work tirelessly restoring classic cars. These vital skills preserve historically and culturally important rolling pieces of mechanical artwork which educate and delight owners and enthusiasts, and light up a child’s face in wonder when they glide by. I’ve been that child and I’m now that enthusiast.”