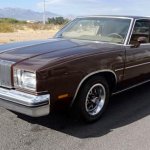 In a world in which import brands have become the most popular with Americans who buy passenger cars instead of various forms of trucks, it may be hard to believe that in the late 1970s and into the early ‘80s, the best-selling car in the US not was produced by a domestic brand, but was, indeed, the Oldsmobile Cutlass.

For the 1975 model year, Oldsmobile offered the Cutlass with a couple of more fuel-efficient engines, bringing back a 250icd inline-6 and also offering a new 260 V8 based on the larger 350 Rocket V8. Not only did the Cutlass outsell Olds’ popular Delta 88, but overtook the Chevrolet Chevelle and Ford Torino to rank second in car sales behind only the Chevrolet Impala/Caprice.

For 1976, a design update for the Cutlass included a waterfall-style split grille and a more-sleek coupe contour — driven by Richard Petty to victory in the 1979 Daytona 500 — and the Cutlass, with cars ranging from 4 cylinders to the muscle-car 442, surged to No. 1 in the overall car sales race.

GM switched mid-size vehicles such as the Cutlass to a front-drive platform for 1982, when the best-selling car in the US was the Ford Escort. The Cutlass reclaimed the crown for 1983.

The Cutlass was cut from the Oldsmobile lineup after 1997 and despite the best across-the-board array of vehicles, led by the Aurora, Oldsmobile itself was shed by a cost-slashing GM in 2004.

Which brings us, at long last, to the Pick of the Day, a 1979 Oldsmobile Cutlass Supreme being advertised on ClassicCars.com by a dealership in O’Fallon, Illinois.

But as it turns out, this isn’t just any 1979 Olds Cutlass Supreme but, the dealer notes, the very one that appeared in the 2010 movie Love Ranch featuring Joe Pesci and Helen Mirren.

Sounding like a line from the film about brothel owners and struggle with the IRS and “church ladies” and their bid to become boxing promoters, the dealer notes the car’s “deep brown paint brings your eye in and matches well with the tan top, and tan cloth interior.”

The dealer also notes that this is fifth-generation Cutlass coupe with a vinyl roof is a one-owner vehicle with numbers-matching 305cid V8 engine topped by a 4-barrel carburetor and linked to an automatic transmission. The odometer shows more than 95,000 miles.

The car has power steering and brakes, rally wheels with new radial tires, and Tri Amp AM/FM/CD stereo with Bluetooth capabilities and  “theatre quality sound.” The car also appears to have a boomerang-style antenna mounted on its trunk and wears “Hearst Equipped” badging, neither of which are explained in the advertisement.

“This generation is often customized and is very versatile,” the dealer adds. “These classics can be lifted or lowered on a budget and aftermarket bolt-on performance upgrades are common and affordable.

“This classic is great for weekend cruising with plenty of room for the whole family.”

The car is offered for $30,000. To view this listing on ClassicCars.com, see Pick of the Day.

The post Pick of the Day: From the time when Olds Cutlass was the best-selling car in the US appeared first on ClassicCars.com Journal.