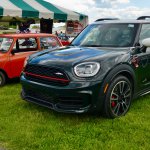 I have owned two of the first-generation examples of the R53 Mini Coopers — a Cooper S and a John Cooper Works edition. I prefer their smaller size and their simplicity. But I have to admit that I found the newest 2021 Mini Cooper Countryman John Cooper Works edition not only to be a serious performance car, but one that bats way above its pay grade.

Opening my eyes to the capabilities of this larger Mini was taking it on a recent road trip to the Carlisle Import and Performance Nationals in Pennsylvania.

Mini claims a 4.4-second sprint from standstill to 60 miles per hour for the vehicle, but after driving one for a week, I think that figure is conservative. The JCW Countryman is the quickest street-legal Mini. Consider that the Mini Cooper JCW GP edition needs 5.1 seconds to reach 60, and also is slower than the Counryman in a quarter-mile drag race.

While the engine is a 2.0-liter 4-cylinder, it also is twin turbocharged and provides 301 horsepower, with 331 pound-feet of torque available as quickly as 1,700 rpm.

Not only is the Countryman quick, but the driving dynamics of this amazing car are simply mind boggling, with an astounding amount of grip and excellent handling when driving near the limit.

The Countryman I tested was completely loaded with extras such as the Convenience Package, Driver Assistance Package, and the Iconic Package that includes dynamic damper control.

The car simply goes wherever you point it and does whatever you ask it to do from behind the wheel. While driving behind a seeming endless line of tractor trailer rigs, the car easily swept around these mobile highway obstacles.

It’s the kind of a car that if you can think it, the car can do it. It is really that quick.

And yet this fastest offering from Mini does not come with the option of a manual transmission. Nonetheless, I have to say the response from the automatic gearbox makes you wonder about manuals because it offers instantaneous response from up and down shifts and was never found to be hunting for the proper gear.

Even in automatic mode, the car seems to know what gear you want to be in for the given situation. I wonder if there is a new telepathic component to this latest generation of I-Drive; I never was able to catch the car flat footed.

The ride is more than bearable for a 300-mile driving day and niceties such as adaptive cruise control make endless interstates filled with slow cars in the passing lane much less stressful.

During the drive I made my usual pre-Carlisle stop at a White Castle in New Jersey, ate my burger breakfast, and got back under way in short order.

Arriving at the event on Friday I was greeted by a number of Minis in the Mini corral and parked between another JCW car, this one a second-gen R56 2-door, and a 1960s era classic Mini Cooper S. After answering a number of questions and giving all who asked a quick tour of the new car, I made my way around the show to see what neat cars had come this year.

After my brief tour of the show I came back to my car and found a new group checking it out, so I gave another tour of the car, describing the driving experience. A Mini owner with his GP edition on display was stunned to hear that the 0-60 performance on my test car was more than 1.5 seconds quicker than his. I consoled him by telling him that mine might be faster but his is rarer and cooler than mine due to the fact that the GP was a limited edition.  His comment was yeah, but you can carry four people and a big dog comfortably in yours and I can’t.

True statement, plus the seats in the JCW Countryman were covered in excellent leather and Alcantara and were as nice as Recaros but, while racing orientated, were much more comfortable than pure racing seats. The rear seats were also more than usable, making this a true 4-seat car. Even with my 6-foot-4 self in the driver’s seat, a person could sit comfortably behind me, pretty amazing for a car as small as the Mini.

So, you know what I like about the car, but are there any negatives?

I dislike the look of the main instrument cluster. It looks to me as if someone found a small flat-panel display and stuck it on the column. I am not one of those people who hates digital gauges, but there has to be a more elegant and classic way to do digital. Every time I looked at the main gauge display I saw a missed opportunity for exercising some Miniesque whimsy.

But that was my only issue with the car. Sure, it is the largest Mini built, making some question the name Mini being applied. But it does happily afford all the fun of driving you expect from a Mini, and the added performance makes for something that you could take for a track day in the morning and then pick up the kids from school in the afternoon.

This seems the ideal vehicle for those who want a serious performance vehicle that also is practical for daily driving duties. And for those who love the Mini anyway, this big but quick Mini is an amazing car that will keep you smiling with every mile driven.