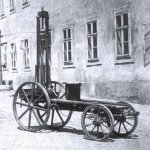 Have you ever heard of Siegfried Marcus? Neither had I, until I was part of a recent panel discussing early automotive history for the BBC World Service’s The Forum program broadcast.

Although Karl Benz and Gottfried Daimler are credited with inventing the transportation device we’ve come to know as the automobile, it was actually Siegfried Marcus who was first, and by two decades.

It was as early as 1864 that Marcus started making petroleum-fueled motorcars. The Austrian inventor who would hold 131 patents, though he never applied for one for the motorcar, became an apprentice mechanic at age 12, went to work at 17 for a company that built telegraph lines, and later worked as a medical equipment technician.

In 1860, he opened his own shop in Vienna to produce mechanical and electrical equipment.

“Who really invented the first automobile?” Michael MacRae writes on the website of the American Society of Mechanical Engineers. “It all depends on how you define words like ‘automobile,’ ‘first,’ and ‘invent.’ But if the question is, who was the first to gear a combustion engine to a set of four wheels to make it go, the answer must be Austrian inventor Siegfried Marcus.

“His primordial design lacked numerous now-standard features such as brakes, steering, and seats, to name a few,” MacRae notes. “But what it did have – an internal combustion engine, a carburetor and four wheels – would provide the basic DNA of gasoline-powered automobiles for the next 140 years and counting.”

So why haven’t we heard of Siegfried Marcus? Austrian school children learned about him and considered him a national hero of sorts in the early years of the 20th Century. But then the memory of Marcus was all but erased.

Why? Because he was Jewish, and after the Nazi invaded Austria in 1938, records of his work were destroyed and his name removed from text books.

“They largely succeeded in writing him out of history,” MacRae explains. “Exact dates for his key innovations are still difficult to nail down. But there is no obfuscating the fact that this ahead-of-his-time engineer and inventor built four progressively sophisticated combustion-engine cars over a 10-to-15-year span, and many of his inventions have found their way into the cars of today.”

One of his motorcars did survive World War II, hidden behind a false wall at the Vienna Technical museum (and currently is owned by the Austrian Automobile Club). Only in recent years have Marcus’s accomplishments drawn attention, especially to his work on ignition and carburetors.

As it turns out, MacRae writes, “Self-propelled transportation was an intellectual rather than commercial enterprise for Marcus. He pursued his many areas of technological interest, including the use of liquid fuels for lighting applications.

“When he realized the explosive force that occurred when he used sparks to ignite an atomized petroleum-and-air mixture, he quickly realized the potential to harness that power to do work. His two-cycle internal combustion engine was born.”

One of his first projects was using his engine to power a four-wheeled cart, which MacRae notes “had the ultimate manual transmission.”

“For his first attempt, he mounted the motor on a four-wheeled cart and connected it to the two back wheels. It had the ultimate manual transmission – literally a hefty helper who lifted the back end up to hand-start the car by spinning a rear wheel. When ready to roll, the assistant lowered the car and off it went – for a history-making 500 feet.”

Marcus would refine his future vehicles, one of them reportedly used to shuttle passengers from the train station to a hotel, but apparently, they all were one-offs and he did not produce them for sale.

Marcus died in 1898 and MacRae notes that “during his lifetime, he was widely considered (and formally honored as) the originator of the motorcar.”

To read more about Marcus, visit the Hebrew History or The Truth About Cars websites.

The post Who really invented the motorcar? appeared first on ClassicCars.com Journal.