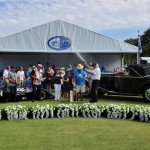 A 1926 Hispano-Suiza H6B cabriolet and a 1974 Shadow DN4 were selected as Best of Show winners May 23 at the 26th annual Amelia Island Concours d’Elegance. The event was delayed from its usual March date in 2021 because of the lingering impact of the coronavirus pandemic.

The Best in Show Concours d’Elegance Trophy went to the Hispano-Suiza owned by Jill and Charles Mitchell of Stuart, Florida. The car wears Cabriolet Le Dandy coachwork done at the Henri Chapron Works in 1931.

The Best in Show Concours de Sport Trophy went to the Shadow racing car wearing its historic UOP livery that carried Jackie Oliver to victory in four of five races during the 1974 Can-Am season. The car is owned by James Bartel of Key West, Florida.

“The 1926 Hispano-Suiza H6B cabriolet and the 1974 Shadow DN4 both represent the excellence we strive for at The Amelia,” Amelia Island concours founder Bill Warner was quoted in a news release.

“This year’s show field might have been reduced to encourage social distancing, but the quality of the entries made selecting the winners as difficult as ever.”

Also featured at the event on Amelia Island was an 11-car array of vehicles driven by the event’s honoree, racer Lyn St. James, who excelled in what generally was and still is considered a men’s sport.

“We were thrilled to honor the inspiring Lyn St. James,” Warner noted. “I think we borrowed a little of her unmatched tenacity and grit to make No. 26 a reality.”