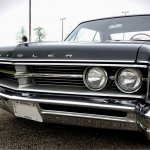 I’ve always been a sucker for the idea of vehicles, especially collector vehicles, being handed down through the generations of the same family, typically father to son or daughter, or perhaps a nephew or niece, and then to that person’s son or daughter.

One reason I’m attracted to such vehicles is that they are likely to have been well-maintained by the family or, if parked for a few years, the ensuing generation has worked to restore the vehicle to the way Grandpa drove it.

This week, for my turn to peruse ClassicCars.com‘s AutoHunter online auction site, I’ve found two multi-generation family cars, and a vehicle that’s being offered after 47 years of original-buyer ownership.

Unfortunately, we’re not told much about this car’s story, except that it has been in the possession of the same family since it was new. It’s a two-door hardtop from the second-year of the second-generation of the non-letter series of Chrysler’s famed 300 model and is powered by a 325-horsepower, 383cid V8 linked to a 3-speed automatic gearbox.

While parts have been replaced in the past dozen years, the selling family notes things that need to be done.

The car appears to be in survivor condition and looks good in the photos, which include those of its blemishes. The exterior is black and the interior red. Interestingly, there’s no cutout in the dash for a radio. Pity we aren’t told more about the car’s history.

This Fox-body Mustang was acquired two years ago by the son-in-law of the original owner, and it has been driven nearly 120,000 miles during its lifetime (the 5-digit odometer shows 19,679 but has rolled over once, we’re told).

Like the Chrysler above, the Mustang is black outside and red inside, and in the case of the Mustang, there is a radio, a stock AM/FM/cassette deck.

This pagoda-roofed Mercedes roadster is being offered for bidding after 47 years with its original owner. The roof can be removed and the car driven open to the environment.

The car reportedly has been driven only 109,075 miles in all those years, and its 158-horsepower, 2.8-liter inline 6-cylinder engine was overhauled in 2000. The engine’s output reaches the rear wheels through a 4-speed automatic transmission that was overhauled at the same time as the engine. Engine and brakes reportedly were serviced recently as well.

The car has been repainted in its original Tunis Beige color and has a black, wood-trimmed and air-conditioned interior. The car’s original Becker Europa radio has been replaced with a modern but retro-looking unit.

To view these and other vehicles up for bidding, visit the AutoHunter website.