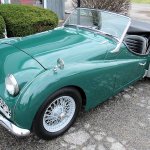 There have been many great British sports cars, but my all-time favorite of the small-bore English roadsters has always been the Triumph TR3.

The Pick of the Day is a 1961 Triumph TR3A being advertised by a Washington, Missouri, dealer on ClassicCars.com. Finished in British Racing Green with a black leather interior and riding on correct painted wire wheels, this TR3A is the essence of the classic British sports car.

When it was introduced in 1955, the TR3 was a bit of a game-changer, offering strong performance at a more affordable price than most cars in its class. The TR3 would continue to be produced through 1962, at which time it had started to seem old-fashioned, and replaced by the TR4, which had more of the style and amenities expected by drivers in the 1960s.

The TR3A was an improved version of the original TR3, offering better performance.  When new, the TR3A could cover 0-60 in less than 11 seconds and had a top speed in excess of 110 mph, enough to be among the hotter small roadsters of the era. The TR3 also acquitted itself well on race tracks; it was raced at Le Mans, Sebring and Daytona, as well as on such rallies as the Monte Carlo.

In addition, the TR3A is a surprisingly comfortable car to drive, even for taller people. Sure, the top is a typical Erector Set situation, and it has removable side curtains instead of rollup windows. But in nice weather, the TR3 is about as much fun as you can have in a classic cut-door sports car, and it can be driven for hundreds of miles in comfort.

The seller states that this TR3A was restored a few years ago, and the pictures show that it looks to be in excellent condition. Details I noticed in the pictures are correct carpets, correct seat leather, a correct and very clean engine compartment and no visible rust. An additional bonus is that this is an overdrive equipped car, making it as nice to drive on the interstate as on back roads.

When you acquire a car at the price point of the TR3A, you should always buy the nicest one you can afford, as restoration costs will well exceed the car’s value. This TR3A seems to be one of those nice ones, ready to drive on vintage rallies and club meets, and possibly nice enough to work as a show car.

The Triumph includes its tool kit and all-weather gear, including removable top and side curtains, which look to be in as-new condition.

The asking price for this clean TR3A is $35,995, which would be quite a lot of classic British motoring for the money.