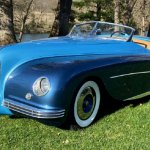 You likely know Bret and Bart Maverick from the 1957-62 television series, and you might have flown a Maverick helicopter from Las Vegas to view the Grand Canyon. Regardless, you certainly are aware of the Ford Maverick. But what do you know about the Maverick Sportster?

What we know is that a Maverick Sportster will be displayed on the show field May 23 at the Amelia Island Concours d’Elegance.

The concours reports that this is one of seven such vehicles made by aeronautical engineer H. Sterling “Smoke” Gladwin Jr. with “a California-flavored 1950’s take on the French species often called the boulevardier.”

The concours adds that this 1953 example will be making its international concours debut “thanks to years of ruthless research and an exquisite restoration.”

Gladwin was a retired Boeing, Lockheed and NASA engineer and former dry lakes hot rodder who based his vehicles on Cadillac foundations, “and he said so openly in Maverick sales literature,” the concours notes.

“Stock Cadillac components mated with the reduced weight of its fiberglass body shell – some Mavericks had no hoods or doors – gave the Maverick a power to weight ratio of 12-to-1, something that engineer Gladwin compared to high performance aircraft.

“That made for a boulevardier with muscle. Cadillac’s 331 OHV V-8 could be mated to any stock Cadillac transmission.”

Some versions came with only a passenger-side door because Gladwin didn’t want the driver to step out of the vehicle into traffic.

“My dad was really taken by a 1937 Terraplane,” Bruce Gladwin, Sterling’s son, told Motor Trend magazine in 2014, “but he liked all cars, especially Packards and Cadillacs. He drove an early ’50s Cadillac two-door fastback, and he’d installed a La Salle manual transmission in it.

“Dad was in a think tank at Boeing. He worked on the triggering mechanism for the atomic bomb. And he was fascinated with fiberglass. He made a fiberglass basketball backstop with a Mylar surface, but he was unable to produce it commercially. He was a Renaissance guy who was very interested in audio and hi-fi.”

Gladwin built the Maverick for himself, but after others saw it, he launched Maverick Motors and built six more to sell, and even offered a fiberglass hardtop as an option.

“The Maverick is one of those rare customs I’ve taken to calling a ‘destination car’ – a car so elegant and beautiful that it’s capable – all by itself – of drawing hardcore car people to the Amelia,” concours founder Bill Warner is quoted in the announcement of the car’s appearance.

“I’m proud that the owner has chosen us for its concours debut and that it’s a 100 per cent American car even though it speaks to me with a Parisian accent.”

The inaugural Chattanooga Motorcar Festival in 2019 included a time trial competition on a roadway along the Tennessee River. When the festival is staged again this fall (October 15-17), the time trial will be replaced by wheel-to-wheel racing competition on a full street circuit, officials have announced.

“We want our second ‘annual’ event to be a true motorcar festival that includes all four significant aspects – a concours d’elegance, a road rallye, a car auction and race-track competition,” event advisor Alexis Bogo is quoted in the announcement. “From the racing events and nightly street festivities in the West Village, to the proximity to the Tennessee Aquarium, Children’s Discovery Museum, High Point Climbing, and other family-friendly attractions, there will be something for everyone within walking distance, creating a unique family-friendly experience in the heart of downtown Chattanooga.”

The 2-mile downtown street circuit — the Pace Grand Prix at the Bend, named in honor of the late Jim Pace — will include 8 turns with its main entrance at Blue Goose Hollow Park.

“You drive, we handle the details” is the theme for a trio of Classic Motorsports Road Tours scheduled for 2021. The Orange Blossom Tour, May 16-19 in east central Florida, and the Smoky Mountain Tour, May 30-June 3 and based in North Carolina. New to the lineup is the Golden State Tour, October 3-7 in Northern California.

These will be hub-style tours, “so no packing and unpacking every day.” Itineraries include visits to private car collections, historical and natural attractions, as well as scenic driving roads and luxurious resort accommodations.

Concours within a concorso

There will be something of a concours within a concorso August 14 when Concorso Italiano also hosts the return of FCA-PR Vintage Ferrari Concours judging with Ryan Pimentel, FCA-PR director of concours, leading the team appraising the quality of the pre-2011 Ferraris.

The Road America racing circuit in Elkhart Lake, Wisconsin, opens its vintage racing calendar for 2021 with the SVRA Vintage Festival weekend May 14-16. In a change from the usual racing schedule, the weekend will include F4 U.S. and FR Americas competition.

Harry Metcalfe, co-founder of Evo magazine and Harry’s Garage, has been selected as “The Collector” to be honored during the 2021 London Concours, scheduled for June 8-10.

Among the vehicles from Metcalfe’s eclectic collection to be displayed are his concours-winning and recently restored Lamborghini Espada, a selection of Paris Dakar-winning motorcycles from the 1979-1998 period, the Ferrari Testarossa “Monodado” he drove from his home in the Cotswolds to the Sahara, and several limited-edition Jaguars.

Have an event to add? Email details to journal@classiccars.com

The post Meet the Maverick, and this one is neither a TV gambler nor a Ford appeared first on ClassicCars.com Journal.