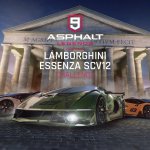 Lamborghini is producing only 40 examples of its track-only Essenza SCV12 hypercar unveiled at the recent Shanghai auto show. But don’t fret. You still can get your hands — or at least your computer-game controller — on one of them.

On May 13, Lambo’s Essenza SCV12 makes its debut in Asphalt 9: Legends, an online motorsports game that recently had its 1-billionth download.

“Gameloft — the developer and publisher company behind Asphalt — chose the Essenza SCV12 because of its uniqueness, its sleek and futuristic design combined with advanced aerodynamics, and its engine – the most powerful V12 naturally aspirated engine ever developed by Automobili Lamborghini, capable of generating more than 830 horsepower, “ Lamborghini noted in its announcement.

Developed by Squadra Corse and designed by Lamborghini Centro Stile, the Essenza SCV12 was unveiled in 2020. Buyers were promised “an exclusive club” with access to special programs to drive the most prestigious racing circuits in the world.”

Meanwhile, Lamborghini says, it is continuing to invest in the e-Sport scene.

“There is a digital version of all the GT championships that Lamborghini competes in, giving real drivers and fans the chance to have fun but also to gain experience through simulations on virtual circuits,” said Giorgio Sanna, head of Automobili Lamborghini Motorsport.

“Gaming certainly has a more playful and less realistic approach, but it’s an important tool for introducing our cars to the general public and the younger generation.”

When the SCV12 launches onto the gaming screen, drivers will be able to select from eight colors and compete in the first “Lamborghini Essenza SCV12 Challenge.” The challenge will include three open qualifying sessions — May 13-16, June 10-13 and July 1-4. The top-100 will advance to closed qualifying sessions in August. The top-8 then will go to a final round of competition scheduled for September 18.