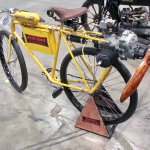 One of the things I like about collector-vehicle auctions is that, even if you’re not buying or selling, just wandering around the docket can be one of the most informative and entertaining car or motorcycle shows anywhere anytime.

That was underscored this past week when Mecum Auctions staged its 30th annual Las Vegas collector motorcycle sale. I really wanted to see the complete set of a dozen Harley-Davidson “knuckleheads” coming from the J.C. Burgin estate. I also have an appreciation for the old board-track racing machines, which have no brakes other than the bravery or foolishness of those who raced them.

I’m also drawn to motorcycles with sidecars, to early Henderson and Pierce 4-cylinder machines, vintage motor scooters, and was quite proud of myself for recognizing a very rare Militaire, a bike made for military use in World War I.

One of the delights of such events is stumbling across a car or motorcycle you’d not previously seen, and in my case at Mecum’s Las Vegas sale, that machine was the 1919 Aero-Bike.

The bike’s full name was 1919 Aero-Bike Almost Like Flying and, indeed, mounted at the rear was an aircraft-style propeller. I’d seen such things on either ends of some four-wheeled motorcars, but hadn’t seen a motorcycle such as this contraption.

Perhaps, as it turns out, because the Aero-Bike was a one-off, built by skateboard pioneer and punk rock musician Duane Peters.

“Also known as the ‘Master of Disaster,’ the skateboard Hall of Famer and skate-punk underground founding member is the man behind now-legendary tricks like the into the pool ‘acid drop,’ ‘footplant,’ ‘fastplant’ and infamous 360-degree ‘loop of death,’ where he rode around the inside of an enclosed loop like a Hot Wheel on its orange track,” Mecum notes in its description of the bike and its creator.

“Unlike his long-haired cohorts back in the ’70s, Peters chose punk rock and joined forces with like-minded skate punks and helped create an ethos that he carried through the ’90s as a singer in the U.S. Bombs, Die Huns and The Great Unwashed.

“That Evel Knievel is one of Peter’s heroes should come as no surprise. The Aero-Bike is also known as the ‘Big Balls Special,’ and the menacing moniker is not referencing skateboard wheel bearings.”

To create the machine, Peters combined a 1919 engine with a modified Hawthorne Flyer frame. Mecum notes that Hawthorne Flyers, produced by various bicycle manufacturers, were sold by Montgomery Wards department stores from the 1920s and on into the 1960s.

“Countless kids likely rode a Hawthorne over their first daredevil jump, but Montgomery Wards never offered a Flyer with a two-stroke twin-cylinder drone engine mounted on the back,” Mecum points out.

“Peters constructed the Aero-Bike with an eye on land-speed records.”

Mecum goes on: “The drop handlebars, Brooks saddle and torpedo fuel tank with hand-operated brass pump harken back to board track racing, and the rear-mounted engine adds more than a few levels of danger.”

Speaking of danger, pocketpistols.com explains, “You can thank Duane Peters for skating the way you do. You can thank Duane Peters for defining skateboarding in the late 70’s and early 80’s, and setting it on its current course. He took the elegant freestyle of the 1970s and shoved it through a meat grinder. He took skateboarding “Off The Wall” and went balls-to-the-wall. He put the snarl in gnarl, the punk in rock…

“First to do the Death loop in 78, layback rollout, sweeper, Indy air, acid drop, invert revert, and much more. Duane Peters isn’t a relic – he didn’t invent the Indy Air and disappear, retire, or fade away. Pushing 50, DP has been charging as hard as ever, skating, touring, slamming, and getting right back up to do it again.”

The post Think skateboarding is crazy? Consider the bicycle with a propeller appeared first on ClassicCars.com Journal.