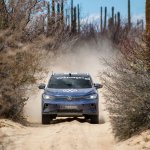 Before it was a race track, the Indianapolis Motor Speedway was constructed as a proving grounds for Indiana’s fledgling automobile companies to showcase the durability of their early motorcars. Ever since, automakers have been using motorsports as a way to validate their vehicles’ capabilities.

The latest such effort was Volkswagen’s entry of its new ID.4 electric-vehicle, which was entered in the National Off-Road Racing Association’s Mexican 1000 race on the Baja peninsula.

The goal was to demonstrate the capabilities of VW’s electric powertrain in “incredibly demanding conditions and terrain.”

To help pull off the project, VW recruited rally veterans Tanner Foust and Rhys Millen Racing to make some modifications so a standard production vehicle could compete in such circumstances.

The result? “ID.4 performed amazingly over a total of 840 miles of off-road racing,” Volkswagen proclaims in a news release.

“This was an exciting test of ID.4 technology because no other production-based EV had ever entered this event, let alone completed it,” Scott Keogh, president and chief executive of Volkswagen of America, is quoted. “Congrats to our team for demonstrating that EVs can stand up to extreme environments, and showing how fun electric vehicles can be. The ID.4 could definitely be the Baja Bug for the electric age.”

The Baja Bug reference, of course, is to the Volkswagen Beetles and Beetle-based vehicles such as the Meyers Manx that competed in off-road events in the 1960s.

“This was everything we had hoped for,” Foust is quoted. “The course was challenging, but the ID.4 was more than up to the tasks we asked of it. This demonstrates the real potential for EV technology to make an impact in all sorts of areas that we have only just begun to explore.”

Racing stages took competitors from 33 to 167 miles at a time. The ID.4 was recharged primarily by a portable biofuel-powered generator connected to a 50 kW flat charger.

“In a couple of instances where the ID.4 was scheduled to be transited to the next stage but the charger was not available, the team flat-towed it behind a chase vehicle for a short distance, using the regenerative braking to add range,” VW noted.

“Despite the brutal nature of the Baja wilderness, the only damage suffered by the ID.4 was some cosmetic injury to the rear bumper,” VW reported.

“All of the vehicle’s key power, battery and control systems performed as expected. The ID.4 was raced mostly in ‘B’ level battery regeneration mode with stock traction control turned on.”