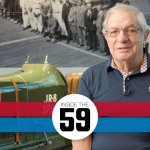 Bill Warner, founder and chairman of the Amelia Island Concours d’Elegance in Florida, looks right at home seated in front of a 1923 Miller 122 race car while speaking about motorsport history and his connection with the Brumos Collection museum in Jacksonville.

Warner appears in the ninth episode of the Brumos Collection’s video series, Inside the 59, which is appropriately named “A Conversation with Bill Warner from the Amelia Island Concours.”

Describing how the Brumos Porsche dealership was instrumental in his creation of one of the nation’s greatest automotive events, Warner speaks in the video about Miller and Porsche race cars, the classic splendor of an Alfa Romeo 8C 2900, and how many of the photographs that decorate the walls of the museum were ones that he took more than a half century ago.

“During the Collection’s planning stages, they wanted to have some of my work,” said Warner, a lifelong motorsports photographer. “I was happy to provide photos of great drivers like Hurley Haywood, Peter Gregg and Roger Penske, who drove for Brumos in 1959 and 1960. I’m proud to share these images, many of which date back 50 years.”

The Brumos Collection, which opened in January 2020, and the Brumos dealership is located not far from where the Amelia Island Concours takes place, this year on May 23 – the event was moved back from its customary timeframe in early March because of pandemic concerns.

“Every major show has great collections in their backyard they draw from,” Warner says. “The Brumos Collection has a phenomenal selection of cars, which can make or break the excitement that you’re trying to produce with a Concours d’Elegance. It’s extremely important to have such a significant inventory of just within miles of where we’re putting on the show.”

Naturally, the collection dedicates much of its space to its own racing success, showing off the succession of Porsches that brought fame and glory to the Jacksonville dealership and racing enterprise.

There is also a terrific grouping of Miller race cars, among the most beautiful and successful of pre-war competitors, and other significant vintage racers from the classic era.  Also in the museum are a number of splendid classic motorcars, such as the 1939 Alfa Romeo 8C 2900B that has won Best of Show at the Amelia Island Concours.

Warner says that this year’s concours “will emphasize the impact of electric cars, both historically and as a path toward the future of automotive technology and manufacturing,” according to a Brumos Collection news release.

Other features of the 2021 Amelia Island Concours include Chevrolet-powered race cars in a class called Chevy Thunder, a class for Hispano-Suiza classics and an oddball showcase of the “Weird and Wonderful.”  This year’s honoree is racing veteran Lyn St. James.