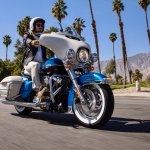 Inspired by the 1969 Electra Glide, the first Harley-Davidson motorcycle with “batwing” fairing, the motorcycle manufacturer has announced a limited-edition Electra Glide Revival model as part of its new Icons Collection.

Each year one or two such models will be produced, and then “never be resumed or repeated,” Harley-Davidson said in its announcement.

“Each Icons Collection motorcycle will be serialized, and the purchaser will receive a certificate of authenticity.

“With The Hardwire (a 5-year strategic plan announced earlier this year), we made a commitment to introduce a series of motorcycles that align with our strategy to increase desirability and to drive the legacy of Harley-Davidson,” Jochen Zeitz, Harley’s chairman, president and chief executive is quoted. “With that in mind, I am proud to introduce our new limited edition Icons Collection, a series of extraordinary adaptations of production motorcycles which look to our storied past and bright future.”

Harley-Davidson said the Icons Collection debuts with the Electra Glide Revival model, “a retro-classic motorcycle for the nostalgist who longs to ride a bike with style both distinctive and timeless.

“Global production of the Electra Glide Revival model will be limited to a one-time build of 1,500 serialized examples, scheduled to reach authorized Harley-Davidson dealers in late April, with an MSRP of $29,199.”

The company said the design is inspired by the original Electra Glide and notes that that machine’s fairing “became an iconic – and often imitated – Harley-Davidson styling cue, its shape an instant on-the-road identifier of many Harley-Davidson models and the foundational design of the fairing featured on current models.

“In 1969, the accessory fairing and saddlebags were only offered in white molded fiberglass, and the Electra Glide Revival replicates that look with a Birch White painted finish. The period-inspired tank medallion and Electra Glide script on the front fender complete the look.

“The Electra Glide Revival will be offered in a single color scheme inspired by the original 1969 colorway: The two-tone fuel tank in Hi-Fi Blue and Black Denim bisected with a Birch White stripe, with Hi-Fi Blue paint on the fenders and side panels.”

“We live in a very dynamic time, each of us experiencing constant change,” said Brad Richards, Harley-Davidson vice president of styling and design. “The Electra Glide Revival model is an oasis in this daily turbulence, a way to reconnect with the fundamental Harley-Davidson DNA that created Grand American Touring.”

The company said design highlights include a solo saddle with a black-and-white cover and a chrome rail, mounted over an adjustable coil spring and shock absorber, which harkens to the FL models from the 1960s as well as being “a functional feature that adds rider comfort.”

The Electra Glide Revival model will be propelled by a Milwaukee-Eight 114cid V-Twin engine rated at 118 pound-feet of torque.  The engine will be linked to a 6-speed Cruise Drive transmission.

The bikes will be equipped with Harley RDRS Safety Enhancement technologies including ABS, traction control, slip control and hill-hold control.

They also will have a tall windshield and splitstream vent to help reduce buffering of the rider’s head, electronic cruise control, a Boom! Box infotainment system with two fairing-mounted speakers, advanced navigation, hand a voice commands, and Android Auto and Apple CarPlay compatibility.

The post Harley-Davidson brings back the Electra Glide as a revival model appeared first on ClassicCars.com Journal.