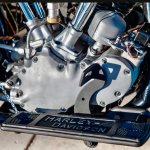 Form a fist. Hold it out in front of you. See how your knuckles form hills and valleys. That contour is much like that of the rocker covers on the Harley-Davidson motorcycle engine produced from 1936 into 1947.

Officially, Harley identified the replacement for its historic flathead V-Twin as the OHV, short for overhead valve. But in the 1960s, people building chopper-style custom motorcycles gave the engine its more well-known name: “Knucklehead.”

Knuckleheads have become cherished by Harley-Davidson enthusiasts. A dozen bikes were in the knucklehead series, and an example of each from the same collection will be offered at Mecum’s annual collector motorcycle auction in Las Vegas.

“Hidden away near Tacoma, Washington, on the outskirts of Mount Rainier National Park — home to the state’s highest peak — is a little plot of land once owned by the late Johnnie Clifton “J.C.” Burgin and his wife, Bernadine,” Mecum notes in its online auction catalog.

“On it, an unassuming barn-like building remains and still houses Burgin’s private collection of motorcycles. While the location and even the building well reflect Burgin’s own modest and relaxed nature, the motorcycles within belie the tale entirely. Far from inconspicuous or understated, the assemblage contains some of the rarest and most desirable Harley-Davidson motorcycles still extant.

“Together, the group of approximately 50 vintage and antique motorcycles stands as one of the only collections in the world to contain at least one example of all 12 of Harley-Davidson’s famed Knucklehead series, and the story doesn’t stop there, with rows and rows of other historically significant machines lining the floor of the barn as well.

“Since the couple’s passing, Burgin in 2005 and Bernadine in 2019, the motorcycles have been cared for by family and friends, including their daughter Lola Freiheit and longtime friend and shop manager Steve White. While the pair attest that caring for the bikes has been their honor, they’re finally ready to part with the assemblage and will offer the jaw-dropping group of Harley-Davidsons and more this April at the 30th anniversary return of the annual Las Vegas vintage and antique motorcycle auction.”

The Burgin collection is one of more than a dozen private troves moving onto the auction docket, Mecum reports. The Dick Ray Estate Collection has consigned 96 motorcycles to the sale and the Stephenson Collection is sending 90, including a 1929 Douglas SW Speed Model.

The East Coast Motorcycle Collection consignment includes a 1911 Pierce Four Cylinder and a 1940 Crocker Big Twin, now reunited with its original engine which was removed and sold but was rebuilt by the late Dale Walksler at his Wheels Through Time Museum.

Another collection entry of note is a 1950 Vincent Black Lightning from the Sinless Cycles Collection. Mecum notes that the bike originally was ordered by Danish sidecar racing champion David Axelson.

Among featured consignments, though not from one of the collections, is a 1907 Harley-Davidson Strap Tank machine with its original engine.

Overall, the auction docket includes around 1,750 motorcycles and is the world’s largest such event featuring motorized two-wheelers.

After many years at the South Point hotel and casino, the auction will be held in the Las Vegas Convention Center, which is allowed more visitors under current Nevada pandemic restrictions. The auction is scheduled for April 28 to May 1.