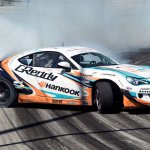 With the coronavirus pandemic forcing changes to the automotive event schedule in 2020, the Goodwood Festival of Speed and the Goodwood Revival were canceled, but a new event was added in the late fall, Goodwood SpeedWeek. Among its features was what the British termed “Driftkana,”

The event apparently proved popular because drifting has been added to the 2021 Festival of Speed schedule, and Goodwood Road & Racing recently published a feature story on its website titled “The four best cars to start drifting.” Note: That’s to start drifting in the UK. The list likely would be different in the US.

“Drifting along with autocross and hillclimbing is one of the last grassroots garagiste motorsports,” writes Ethan Jupp.

“Described by some as the dressage of motorsport, it is one of pageantry over outright pace. That doesn’t take anything away from the fact that like any other motorsport, drifting requires finely honed skill at the top end.

“Being as accessible as it is, it’s one of the most popular motorsports to get into at the minute. So, how do you start? How do you build up the seat time and experience? You need a starter car, of course.

“The truth is that with the sport’s popularity comes an increasingly inflated market for cars that can get you going. Gone are the days of four-figure Nissan Silvias… So where do you begin?”

Goodwood recommends consideration of the first two generations of the modern made-in-Japan version of the classic British roadster, but notes that they are convertibles so a roll cage has to be installed to be eligible to compete in many events in the UK.

Nonetheless, “They’re still cheap, relatively widely available, simple to fix and reliable. There’s good availability of parts and a sturdy market for them.”

“In truth, the BMW 3 Series is rapidly going the way of the S-Body Nissan in this market. That’s to say, overinflated values that continue to rise. This isn’t without reason, though. The 3 Series, be it an E30, E36 or E46, offers a good chassis, decent power depending on the engine and nowadays, a strong aftermarket that supports them.”

“Power is decent, with good scope for modification and reliability is solid, coming from Toyota’s era of massive over-engineering. They handle well, too, though there is a trade-off when it comes to parts availability. You’ll need to be a bit more dedicated to the cause when researching your build. Thankfully, the smaller the community around a car, the more dedicated and well-informed certain members tend to be. There’s a good build and a competitive car to be had there if you’re willing to commit.”

“Many competing in the Pro 2 class in the USA use 350Zs, as do drivers that are just starting out.

“The pros? It obviously has good power, a good chassis and there’s a great aftermarket around it. The cons? Well, some parts are expensive and they can be a bit delicate depending on the example you get. Earlier cars can suffer from engine and transmission issues if unduly abused. Given drifting is effectively undue abuse, supporting mods and spare parts are expensive but advised.”

Fret not if the above don’t excite you. Goodwood Road & Racing has some other options to share:

“There’s very little precedent for the BMW 1 Series as a drift car at the moment but the ingredients are there. Rear-wheel-drive, strong engine options, a good chassis – it’s next in the pecking order after the 3 Series, surely? Then of course there are newer 3 Series and 2 Series models to watch as they age. Keep an eye out.

“It’s also worth watching the Toyota GT86. As Toyota’s driver-focused sports car ages, it comes down in value.

And then there’s these blasts from the past:

If you’re feeling brave, Jaguar S-Types are an option, albeit with next to zero aftermarket support and sketchy reliability prospects. The same goes for rear-driven Mercedes.

A final word goes to, of all things, the Ford Ranger. Lower-sitting rear-driven examples are known to come with limited-slip differentials. Yes, a welded diff is the done thing but you can’t deny the idea of a drifted-out Ranger sounds cool. Go this route at the mercy of parts and aftermarket support but the rewards of kudos in the paddocks could be plentiful. The truth is, if you can get power to the rear wheels, through a manual ‘box, there’s half a chance you can use it to start your sideways career.”