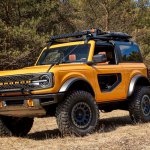 About 100 Ford dealers are planning to open standalone showrooms for the Bronco, according to a Sunday Automotive News report.

Automakers sometimes ask dealers to carve out additional space for new brands or sub-brands, as was the case with Hyundai and Genesis. However, in this case, the idea for standalone “Bronco Stores” alongside existing Ford and Lincoln showrooms originated with dealers, according to the report.

Ford has signed on to the idea. Bronco-only showrooms are optional, Ford United States sales boss Andrew Frick told Automotive News, although dealers that opt-in will get “slightly increased allocations” of the SUVs.

Ford has no corporate template for the stores, just three general configurations, which is unusual for a showroom remodel. Dealers can opt for a completely separate showroom, an expansion of an existing space, or a smaller display within a showroom.

Renderings shown at an October 2020 Ford national dealer meeting showed an outdoorsy theme appropriate for the SUV. The showrooms will also have Bronco branding, rather than the ubiquitous Blue Oval, according to the report. That aligns nicely with Ford’s plan to market Bronco as a sub-brand, which is also why the automaker has both the standard Bronco and the Bronco Sport in its lineup.

While dealers are eager to start selling the Bronco, they may have to wait. The SUV’s launch has already been delayed due to coronavirus-related supplier issues. The 2021 Ford Bronco will now launch this summer, and the manual-transmission Sasquatch package has been pushed back from the 2021 model year to the 2022 model year.