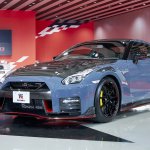 Nissan has announced a fall introduction for the GT-R Nismo special edition and limited edition, with North American pricing to be announced closer to the vehicle’s launch date in this market.

The turbochargers are the ones developed for the GT3-class racing version of the GT-R and thus are lighter and faster in response.

“Each engine is hand-assembled from beginning to end in a special clean room by master technicians known as takumi. Just as great artists sign their work, so do the takumi, with a special aluminum takumi certification plate in a Special Edition-exclusive color on the front of each engine.”

The car also gets a revised 6-speed dual-clutch transmission.

Nismo (or NISMO as Nissan would prefer) is short for NISsan MOtorsports International, the automaker’s in-house tuning division.

“True to its proud heritage, the GT-R NISMO is a more extreme, track-oriented version of the GT-R that has matured through rigorous refinements, becoming sharper and more rewarding as a street car,” Nissan said.

“The GT-R NISMO was extensively enhanced for the 2020 model year with new race-proven turbochargers, improved gearbox shift control, lighter components, reduced overall mass and upgrades to the brakes, wheels and tires. The result was a 2.5-second reduction in lap time around Nissan’s development track, along with an improvement of the GT-R’s inherent high-speed stability, even at speeds of up to 186 mph.

“For 2021, the numerous changes for the 50th anniversary year continue into GT-R’s next decade of automotive excellence.”