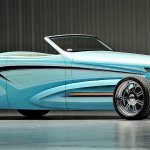 Worldwide Auctioneers hosts its second live sale of 2021 with The Enthusiast Auction scheduled for April 23-24 at the company’s Auburn, Indiana, headquarters and highlighted by a selection of one-off custom cars and street rods, a number of fine classic Packards, and a trove of memorabilia.

Worldwide also stages its first Enthusiast Tour from April 20-23, a rally that begins and ends in Auburn and travels to a variety of northern Indiana locations, visiting car collections, LaVine Restorations and more.

The most-colorful auction entry among the street rods is an award-winning 1934 Chevrolet custom roadster named DuPont Domination, a coach-built beauty created by Dominator Street Rods of Tracy, California, whose owner, Leonard Lopez, was a winner of the Grand National Roadster Show Builder of the Year Award.

DuPont Domination won the award for best paint at the Oakland Roadster Show and was a cover car for Street Rodder magazine.

Another brilliant custom car is the 1957 Buick Century coupe named Lavender Persuasion, the “first ultra-one-off custom” from the famed Rick Dore, according to the auction catalog.  The award-winning custom, created in the early 1990s, is being offered for sale at the auction for the first time, Worldwide says.

Other terrific customs offered on the docket include the 1936 Maharaja Special one-off creation by Deco Rides; a 1931 Ford Model A 5-window coupe street rod; a 1950 Ford Crestliner old-school custom coupe; and a “highly authentic” reproduction of the famous 1952 Fabulous Hudson Hornet of NASCAR fame.

Also up for bidding is a oddball piece of advertising kitsch, a 1929 Ford Model A transformed into the Moxie Horse-Mobile, with a life-size horse statue mounted to the chassis from which the driver actually pilots the car from astride the saddle – a steering wheel juts up from the fake horse’s withers.  A weird way to market soda pop, and a unique collector’s item.

A classic-era headliner is the 1940 Packard Super 8 Model 1807 convertible sedan with one-off coachwork by Derham, offered in a no-reserve auction. The multiple award-winning car known as the Cinderella Packard is formerly from the collection of Richard Kughn.

From the Miller Family Collection are eight fine Packards, each selling at no reserve, including a 1932 Twin Six 905 Sport Phaeton, a 1947 Super Clipper sedan, a 1956 Caribbean hardtop, and a 1948 woody station wagon with attached teardrop trailer.

An impressive standout in Auburn is an iconic American race car being offered for direct sale rather than public auction – a 1965 Shelby Cobra Daytona Coupe previously owned by Carroll Shelby and driven by a number of racing legends.  Pricing is not mentioned, but expect it to go into seven figures.

The Auburn auction is being held live with enhanced online and remote bidding with as-it-happens streaming of the on-block action.

For more information about the Enthusiast Auction, visit the Worldwide website.