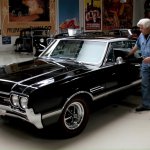 The Pontiac GTO may have kicked things off, but nearly every General Motors brand jumped on the muscle-car bandwagon in the 1960s. Oldsmobile’s contender was the 442, based on the same GM A-body platform as the GTO. A pristine example of the Olds muscle car gets the spotlight on this episode of Jay Leno’s Garage.

The 442 name was derived from its 4-barrel carburetor, 4-speed transmission, and dual exhaust, but Oldsmobile sometimes abandoned that. This 1966 model has three 2-barrel carburetors, feeding fuel and air into a 400-cubic-inch V-8, which produces 360 horsepower. Jay says that’s more than the 442’s Pontiac GTO sibling made at the time, but our research shows the same 360 hp for the GTO.

Oldsmobile was considered a premium brand, so this 442 has a few more luxuries, such as power steering, power brakes (front discs and rear drums), and air conditioning. Those features didn’t normally come on muscle cars from more mainstream brands like Pontiac and Chevrolet, Leno said.

This car is part of the Audrain Auto Museum collection in Newport, Rhode Island, and was sent to Leno’s garage for some light restoration work. The original owner meticulously documented the car, keeping a binder of paperwork to prove its authenticity.

Oldsmobile kept updating the 442 throughout the 1960s to keep pace in the muscle-car arms race. By the end of the decade, the 442 sported a 455-cubic-inch V-8 and ram-air induction, but the golden age of the muscle car ended just a few years later. While fuel-economy regulations and backlash from insurance companies killed off most of the muscle cars, Oldsmobile remained healthy through the 1970s, and managed to coast along until 2004.

As per the norm, Jay takes the car for a drive at the end of the video, which gives us a chance to hear the throaty V-8. It’s fun to watch a great piece of muscle car history stalking the streets of Los Angeles.

Watch the full video for a deep dive into a muscle-car icon.