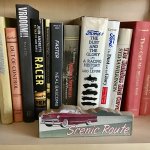 I am not a fan of celebrity, but I have vivid memories of the days I met Leo Levine and Peter Manso, both of whom died in recent days, Levine at 90 and Manso at 80.

Though their names may not mean much to you, both had influence on my career.

I was a budding young motorsports reporter for a daily newspaper in Michigan when I encountered Levine and Manso through their writing. In 1968, MacMillan published Levine’s 630-page book, Ford: The Dust and the Glory: A Racing History, perhaps still the definitive book on a single company’s motorsports history, though I’m sure Ferrari and Porsche fans will take objection to that statement.

Though I have donated most of my automotive library to McPherson College, I have retained my copies of Dust and Glory and of Vroom, which the college’s library will get someday, though probably not until I have breathed my last.

As I young journalist covering motorsports, I aspired to report as thoroughly and to write as well as Levine and Manso. One of the first books I wrote was Ford Racing Century: A Photographic History of Ford Motorsports, and I’m sure I accepted the assignment in part because of Levine’s earlier work on the subject.

My recollection is that I bought my copy of Dust and Glory in Boston, on our way home from our honeymoon trip to Canada’s Gaspe Peninsula, and that I bought Vroom at Kroch & Brentano’s, the amazing and wonderful multi-story bookstore in downtown Chicago, a brick-and-mortar version of Amazon, except you browsed the shelves, held the book in your hands, and brought your selections home with you that day rather than having to wait impatiently for their next-day delivery.

Many, many days and years later, I was an editor at AutoWeek magazine and our publisher, Leon Mandel, suggested we all wear dress shirts and ties the following day because Leo Levine was visiting the office.

After writing Dust and Glory, Levine had become head of public relations for Mercedes-Benz of North America, a job he held for 20 years. Auto writers tended to be a rag-tag bunch, but Levine insisted they clean up when he hosted an event, even to the point that if you were flying to Europe for a press event at Mercedes, you wore a coat and a tie.

Anyway, I dressed properly for his visit, and brought my copy of Dust and Glory with me, which he autographed.

After he retired, Levine continued to write about cars (after his service in World War II he stayed in Europe and raced sports cars for a while). He played and wrote about golf, and was a judge at the Pebble Beach Concours d’Elegance.

After writing Vroom and co-writing with Jackie Stewart Faster: A Racer’s Diary, Manso did biographies of Norman Mailer and Marlon Brando, and in 2002 investigated and chronicled the murder of fashion writer Christa Worthington, a book that led to a trial and conviction of the murderer.

I think Manso was working on a magazine article about NASCAR racing when someone mentioned he was standing just across the press room a few years ago at Las Vegas Motor Speedway.  I walked over, introduced myself and probably embarrassed him saying how much I appreciate a book he’d written decades earlier.

Journalists are taught from their early days in school or newsroom that celebrity doesn’t matter, only the story does. But that doesn’t stop us from having professional heroes, or from being sad when those heroes pass on.