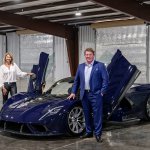 It was back in 1991 that John Hennessey got married and modified his daily driver, a Mitsubishi 3000GT VR4 so he could enter the Nevada Open Road Challenge (finished fourth) and the Pikes Peak Hill Climb, and make speed runs on the Bonneville Salt Flats (setting a class record 177 mph) and the Silver State Challenge (overall winner, again averaging 177 for the 90-mile distance).

Even with all that, Hennessey and his newlywed, Hope, found time that year to start a new business (he had been in the environmental remediation business), and 30 years later, Hennessey Performance of Sealy, Texas, has produced more than 10,000 high-performance vehicles for customers.

As part of its 30th anniversary celebration, Hennessey Performance shared its “top 10 cars of all time:”

“At the end of 1991, looking back at that year of motorsport, I realized I’d learned the first rule of auto racing – if you want to make a small fortune in racing, start with a larger one!” Hennessey said in his company’s anniversary news release.

“To continue my passion, I knew I’d have to find a way to pay for it. So, I thought, if Carroll Shelby and Alois Ruf could make a living by building and modifying cars then maybe I could, too – that’s how our company began.”

In the beginning, working out of a rented garage with one other employee, Hennessey modified turbochargers and intake and exhaust systems for the 3000 GT, its cousin, the Dodge Stealth, and the Toyota Supra and Mazda RX-7.

Two years later, he created the 500-horsepower Dodge Viper Venom 550 for a customer and also produced an aftermarket hardtop for Dodge’s exotic V10-powered roadster. Hennessey helped found the Viper Club of America, and his shop rolled out the Venom 600, and then the 650, which in 1997 posted a top speed of 203 mph.

By the turn of the century, the Venom 800 and 1000 models were ready, the shop staff grew to 5 employees, and the Hennesseys had 5 children, at which point John Hennessey retired from racing.

But while he left racing, he didn’t leave race tracks and in 2004 bought the Lonestar Motorsports complex, a drag strip with return roads that he turned into a test track with a 30,000-square-foot production facility (staffed in 2021 by 50 employees and by students at the Hennessey Tuner School).

A Venom 800 won a 16-car supercar challenge staged by Car and Driver magazine, a Hennessey-tweaked Ford GT hit 234 mph, and in 2009 development was under way on the purpose-built Hennessey Venom GT, which a Chevrolet LS9 V8 would propel to more than 270 mph.

At The Quail, A Motorsports Gathering in 2018, Hennessey unveiled his own 1,600-horsepower F5 engine, which was designed for a new Venom supercar scheduled to launch during 2021.