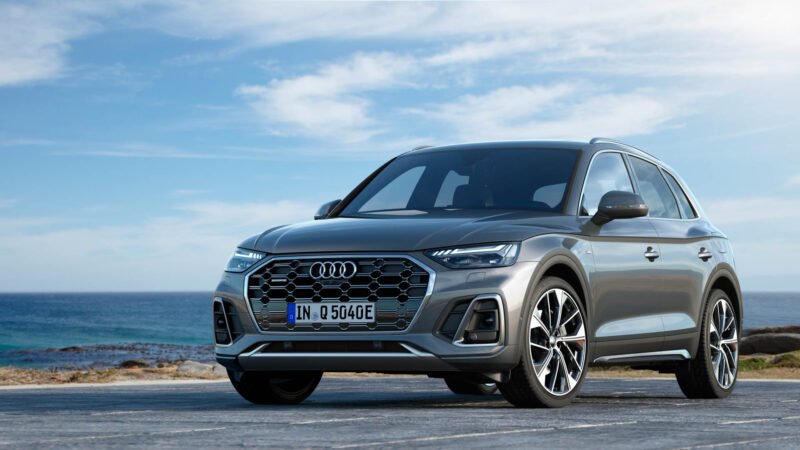 The upcoming Audi Q4 e-tron is almost here, as its official debut is set for April 14, a date on which we’ll see both the standard Q4 and the Q4 e-tron Sportback. When they both finally debut, there’s a good chance we learn of the pricing for each model. Though, even without the official pricing reveal, we’ve heard that the Q4 e-tron is going to be priced similarly to the Audi Q5, though we’re not guaranteeing anything. If that’s true, then what reason is there to buy the Audi Q5?

If the Audi Q4 e-tron is priced within striking distance of the Q5, we see very few reasons to choose the dinosaur-powered car. The new Q4 is a bit smaller on the outside, which will make it easier to park and fit into garages, but will likely have about the same amount of interior space, if not more, due to its all-electric architecture (if its VW ID.4 sibling is anything to go by). So you’ll get a car that’s easier to drive but without a decrease in realistic practicality.

Additionally, the Audi Q4 e-tron will look better, both the standard car and the Sportback model, will have a more interesting interior, snazzier technology, and an all-electric powertrain. Anyone that’s driven a Q5 knows that it’s a fine driving machine but it’s rather uninspired. The Q4 e-tron likely won’t be more thrilling to drive but its electric powertrain will make it far easier and more enjoyable.

Plus, there are going to be massive tax incentives to buy the Audi Q4 e-tron over the gas-powered Q5, along with the fact that electricity is far cheaper than gasoline, especially with today’s current fuel prices. Sure, adding a charger to your home isn’t cheap but the added convenience of never having to see a gas station again is well worth the cost.

Of course, there is one reason why the Q5 might be a better choice and that’s long distance range. Audi hasn’t given out any range specs for the Q4 just yet but expect them to be similar to the Volkswagen ID.4, which has around 200 miles of real-world range on a full charge. While that isn’t as massive as the ranges seen from Tesla or Lucid, 200 miles is far more than enough for 99 percent of Americans’ daily needs.

Admittedly, if you want to go on a road trip, 200 miles isn’t enough, especially with all charging networks that aren’t Tesla’s Supercharger. However, if you’re using your crossover as a daily driver and aren’t too concerned about the once-a-year road trips, the Audi Q4 e-tron is going to fill 99 percent of your needs better than an Audi Q5 will.

The Audi Q5 is a good car; its good looking, luxurious, practical, and packs a nice cabin. However, the Audi Q4 e-tron is all of those things as well, only with better styling, better tech, more interior space, and an all-electric powertrain. Plus, once you’ve driven a relative vanilla-mobile like the Audi Q5 and then drive an EV — any EV for the most part –you’ll soon realize that electrification is the better way.

If you’re in the market for a midsize premium crossover this year, hold off and wait to try the Audi Q4 e-tron. No one’s driven it yet but, unless it’s a total pile of crap to drive or ends up costing far too much, there doesn’t seem to be many reason to buy the Q5 instead.

The post Why Buy the Audi Q5 Once the Audi Q4 e-tron Exists? appeared first on QuattroDaily.