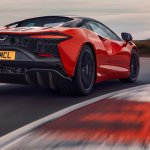 Claiming that its new Artura “high-performance hybrid” sets new benchmarks, McLaren Automotive has revealed details of the car’s powertrain. It also reports that the car will sprint to 60 mph in 3.0 seconds, will hit 200 km/h (124 mph) in 8.3 seconds and has a top speed of 205 mph.

“The Artura’s advanced petrol-electric powertrain delivers an unrivaled combination of throttle response, acceleration and electric-only, zero-emissions capability,” McLaren says in its announcement. “It has been engineered to ensure the all-new McLaren supercar excels across the full spectrum of driving experiences, from everyday urban journeys to track day sessions.”

McLaren Automotive chief engineer Geoff Grose adds, “The McLaren Artura’s all-new, super-lightweight electrified powertrain is at the cutting-edge of high-performance-hybrid technology, engineered to offer all of the advantages of internal combustion and electric power in one package and establish new benchmarks for combined performance and efficiency in the supercar class.”

A key to the car’s performance, McLaren said, was breaking with convention and opting for a compact and lightweight 6-cylinder rather than V8 gasoline engine, a new 3.0-liter twin-turbocharged M630 V6 with a “hot vee” configuration at 120 degrees.

McLaren said the 120-degree configuration optimizes the package by lowering the crankshaft while allowing the turbochargers to be housed within the V. It said the engine also benefits from a straighter exhaust layout.

The Axial Flux E-motor provides “torque infill” as well as the option of traveling more than 18 miles using electric-only power.

The electric motor, which is the size of a brake disc and weighs less than 34 pounds, is integrated within the bell housing of the 8-speed transmission. McLaren notes that the transmission housing is compact, in part because there is no reverse gear. Instead, when reverse gear is selected by the driver, the electric motor simply spins in the opposite direction to move the car rearward.