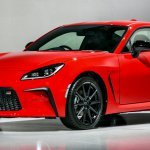 By now, the initials TRD on a Toyota have become familiar and widely recognized in the US marketplace as shorthand for Toyota Racing Development, the motorsports and off-road specialists within the automaker’s engineering and development team.

But do you recognize TGR? If not, you should start because it’s shorthand for Toyota Gazoo Racing, the company’s European-based motorsports and on-pavement racing program that lends its GR initials to several vehicles, the latest the 2022 GR 86, which was unveiled April 5.

The 86 is Toyota’s version of the joint-venture sports coupe designed and developed in partnership with Subaru, though in the case of the GR 86, Toyota notes that it has developed a unique driving feel through a friendly rivalry with Subaru.

Toyota also says the new GR 86 launches into the Japanese domestic market in the fall of 2021 and that news about its availability in the US will be announced “at a later date.”

“The new GR 86 is the third global model in TGR’s GR series of sports cars,” Toyota said, noting that it joins the GR Supra and GR Yaris.

“Conceived as a front-engine, rear-wheel-drive vehicle with intuitive handling and instinctive responsiveness, the 86 launched in 2012. Since then, the vehicles have been utilized as base models for a variety of participatory motorsports, including rallies, one-make races, gymkhana, and dirt trials, while others have been uniquely customized. A total of more than 200,000 86s have been sold worldwide, playing the role of reliable partners for their owners.

“TGR’s new GR 86 and Subaru’s new BRZ were jointly developed. Yet, although the two vehicles share the same vehicle base, the two companies focused on imbuing their respective models with a distinct driving feel.

“While engaging in friendly rivalry with the BRZ development team, TGR sought to develop a vehicle that would provide happiness to 86 fans, and realize an evolution of the 86’s unique driving sensations. As a result, the new GR 86 is specially designed for sports performance, and provides direct and satisfying driving performance of the highest order.”

Toyota said key features of the new GR 86 include:

— Lower center of gravity due to exterior design and aluminum roof and fenders, and lighter weight seats and exhaust system.

— Redesigned interior with switchgear placed so driver can focus on driving.

— New and larger but lightweight 2.4-liter 4-cylinder engine provides 235 horsepower and 0-to-60 sprint in 6.3 seconds, more than a second faster than the previous model.

For more information before the US-spec version is revealed, visit the Toyota UK website.