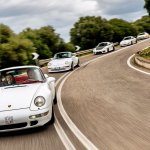 When cars and trucks are being produced, there is an early stage known as the “body in white.” The phrase applies to completed body shells as they head into the paint shop for color to be applied.

Perhaps taking the concept of “body in white” a giant step further,

Guglielmo Miani, who heads Italian fashion brand Larusmiani, thought it would be great fun to stage a road rally, but only for cars wearing white paint, and thus the inaugural Fuori Concorso was held in the California desert early in 2020, with a second was later in the year on the Italian island of Sardinia.

It’s not unusual for red cars to dominate at Ferrari events, or black cars at a Model T club gathering, but what would you think about staging a car show or driving event exclusively for cars of a certain color?

Or here’s an alternative: A car show where cars are parked neither at random nor by marque or model or model year, but by color?

Did you miss World Recycling Day? It was held recently and the British Motor Show used the occasion to launch a Car Robot Competition as part of its “Crazee Creations” category.

So how does it work?

“The Car Robot Competition will see showgoers able to create their own battle-style robots using old car parts, ahead of the show, to fight head-to-head in an arena, which will form a central part of the Show’s Crazee Car Corner, where you will find the weird and the wonderful, from monster trucks to modified cars,” motor show organizers announced.

“Participants are invited to design their very own robot, static or mobile, using recycled car parts. The robots will then be judged for style and creativity before a winner is announced… Teams are invited from schools, colleges, companies, or just groups of friends and individuals.”

The show’s Crazee Car Corner will feature a display of “modified cars, mental motorbikes, oddball caravans, upcycled automotive art and extreme machines. If you like the unusual, you’ll love the Crazee area.”

“The British Motor Show is about cars of all ages, shapes and sizes – it’s a celebration of cars in all their forms and the Crazee Corner is where those are taken to the extreme” said Andy Entwistle, the motor show’s chief executive. “That makes it the perfect place for visitors to create their own car robot creations and let their automotive imaginations run wild – and there’ll be some cool prizes on offer, too.”

The show is scheduled for August 19-22. For more information, visit the show website.

The British National Motor Museum at Beaulieu opens its series of “Simply” car shows on May 23 with Simply Electric, a showplace for electric and hybrid cars and motorcycles and bicycles.

Organizers are particularly interested in any vintage electric vehicles and in classics that have been converted to electric powertrains.

The event will be the first of 15 such one-marque or one-type of vehicle shows scheduled to be staged this year at the British museum.

For more information and a full schedule, visit the museum website.

2 Jet Z, a home-built creation that became a Hot Wheels toy, will be among the vehicles featured May 14-15 at the annual Carlisle Import & Performance Nationals at the Carlisle Fairgrounds in Pennsylvania.

Built by Luis Rodriguez and powered by 630-horsepower version of the 2JZ engine from the Toyota Supra, the car looks like a fighter-jet cockpit on wheels. In 2018, the car was selected as a grand national champion of such full-scale Hot Wheels cars and was shrunk to 1:64 scale to become a real Hot Wheels die-cast toy.

In addition to 2 Jet Z, Rodriguez will show his newest creation, Scorp*lon, a car inspired by one of Syd Mead’s vehicles in the movie Thon.

The Import & Performance showcase also will feature a Volvo celebration, 20 years of the Honda K-Series, 30 years of the Toyota 2JZ engine and 50 years of Opel Manta.

The 48th annual Forest Grove Concours d’Elegance has been postponed until July 17, 2022, the organizing committee has announced. The event is held on the campus of Pacific University, which has become a coronavirus vaccination site.

The post Ever go to an event where all the cars were the same color? appeared first on ClassicCars.com Journal.