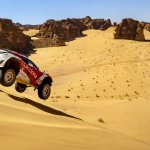 “We’ve worked so hard on this for many years, and finally everything has come together this weekend,” said series founder Alejandro Agag. “It really has been beyond my wildest expectations. If I had written a script for the perfect weekend, I could not have come up with anything better than what we have witnessed these past two days – I’ve never seen such extreme racing in my life.

“This first race weekend will have a huge influence on how Extreme E evolves, and one of the reasons I feel so proud is that we have built this platform where female drivers can shine like they deserve. What we have seen from them here is extraordinary – some incredible talent and courage – and overall, I think it’s fair to say we have really made our mark. I’m over the moon.”

Kristoffersson and Taylor won despite a 60-second penalty for exceeding the 30 kph speed limit in the driver-exchange zone on the first day of the event.

Noting that he found the weekend’s action to be “insane,” team owner and former Formula 1 driving champion Nico Rosberg added, “We have a fantastic team of engineers and mechanics, who prepared perfectly for this first weekend with so many unknowns, and Molly and Johan produced some phenomenal driving.

“Neither of them put a foot wrong in really tough conditions, and they both showed unbelievable speed out there – their performance was really inspiring and I felt really proud watching them. To come back to claim victory after a 60-second penalty caused by a technical problem is just awesome, and they are definitely deserving winners. For the championship as a whole, it’s really been a good start.”

Finishing second was the X44 team with Sebastien Loeb and Cristina Guterrez while Andretti United was third with Timmy Hansen and Catie Munnings driving.

“What an amazing start to the season!” Taylor, a former Australian rally champion, was quoted in the series’ post-event news release. “ It feels a bit surreal, with so much anticipation and preparation leading into the weekend and we all came here not really knowing what to expect.

“It was definitely extreme. It was the first time we had experienced terrain like that, and on every lap, the course was changing – there were so many different variables to deal with. We just wanted to make the most of the little time we had in the car – every single kilometer.

“We had a small issue in the pit-lane during qualifying, but aside from that we were the quickest in every session. You have to be fast when it counts, be smart when it counts and take the big moves when it counts, and for it to all come together when it mattered was really special. Huge thanks to Johan – his opening laps were just insane – and the team has done such an incredible amount of work behind-the-scenes.

“It’s pretty cool to be part of this journey at the start of something that I think has an amazing future. This series is really throwing the traditional rule book out of the window and starting afresh, and I think everyone will agree it was spectacular to watch. The male drivers we have here are the best in any motorsport category in the world, so it’s an awesome opportunity for us female drivers and a real investment in the development of female racing talent. This is just a dream come true all-round.”

“We had some minor issues but we came here very well-prepared, which made our life so much easier out on-track,” Kristoffersson added. “This sport isn’t only about the drivers; it’s about the team giving us the tools to do the job. With such a limited amount of track time, you need to have confidence that the car will do what you ask of it.

Kristoffersson, a three-time FIA World Rallycross champion from Sweden, explained that a key to winning was getting out front quickly.

“I really didn’t want to be in the dust after seeing some of the on-boards (in-car camera video). Those first 30 seconds of the race are what you are really working for, when the adrenaline is pumping the fastest – we’re all adrenaline junkies here, and that’s the feeling you really want.”

The series resumes May 29-30 at Dakar, Senegal.