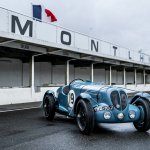 The car was owned by Irish-American heiress Lucy Schell for her Ecurie Bleu racing team and made its debut as part of the car’s three-vehicle entry in the Three Hours of Marseille. The car gained its nickname because of its sky-blue color and the muffled buzzing sound of its engine, according to Bonhams.

The car ran in Grand Prix races at Donington, Pau and Commiges and in endurance events including the Belfast Tourist-Trophy before going to Le Mans in 1939, when it was rebodied with more aerodynamic coachwork by Chappes Frères.

Two subsequent facelifts followed, and the car was successful off the race track in various concours d’elegance. It will be offered at the auction with coachwork in the Chappes Frères style while retaining its original-period engine and chassis, which Bonhams says is a rarity for a racing car from the period.

Also on the docket are:

The car was rediscovered, stored away in a barn, early this century with its original chassis and engine. A restoration was done, except to the interior of the driver’s door, which was retained “as a reminder of how it was found.”

The car later was driven by a succession of Australians before it was purchased by Belgian racer Paul Swaelens, who had it for more than 40 years, selling it to the consignor in 2003. The car since has been fully restored, Bonhams noted.

*1991 Isdera Imperator 108i, a supercar resulting from a Mercedes-Benz design experiment in the late 1970s by Eberhard Schulz, an engineer who formed Isdera to put the design into production and made 30 cars over a period of nine years.

The car has gullwing coachwork over a tubular-steel chassis and is powered by a 5.0-liter M119 V8 engine.

The Bonhams Monaco Sale is scheduled for April 23 at the Fairmont Monte-Carlo overlooking the hairpin turn on the Monaco Grand Prix circuit.

To view the full catalog, visit the Bonhams website.