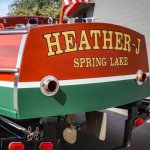 The Pick of the Day is a collectible vehicle, though it is designed for cruising on water, not pavement. And while it is a reproduction of a 1930 Chris-Craft Model 103, it was produced in 1990 by Grand-Craft and a member of the Chris Craft family, according to the Grand Rapids, Michigan, dealer listing the wooden boat on ClassicCars.com.

Christopher Columbus Smith built his first wooden boat in 1874 when he was just 13 years old. Eventually he and his brother, Hank, founded the Smith Ryan Boat Company, which changed its name to Chris-Craft in 1924.

Chris-Craft boats were among the finest in the world, and Henry Ford and William Randolph Hearst were among the company’s customers. The Smith family sold the boat-building company in 1960.

Grand-Craft was established in 1979 by Steve Northuis with help from Chris Smith, a descendent of Christopher Columbus Smith. Grand-Craft has built boats for the likes of Robert Redford, Jennifer Lopez and Kid Rock, according to its website.

“Originally, 24 such boats were commissioned, but only 16 were built. This is number 8 of 16 created in the Holland, Michigan factory.

“Based on the 1930 Model 103, this newer version boat is stronger than the original,” the dealer assures. “Its inner lath runs diagonally instead of vertically, and are epoxy-coated.

“The Heather J has lived her entire fresh-water life in Spring Lake, about 15 miles north of Holland. The triple-cockpit runabout has just 60 hours running time on it. The boat’s excellent condition owes to special care given it by its owner. “

The dealer says the boat was “always properly stored in climate-controlled building since new, it has never endured any freezing temperatures to protect the integrity of the wood, and it has never been allowed to remain for any extended length of time in the water.”

The boat is 24 feet long and 6.4 feet at the beam. It draws power from an OMC/Ford Windsor 351cid V8 linked to an automatic transmission. The engine reportedly has run for only 27 hours.

“The faithfulness to the original Model 103 design and the quality of the workmanship in this build are evident in every component, in every detail and on every surface. It is a fully documented mint-condition execution in Honduran mahogany.

“From the chrome on the operating controls; to the deep-green hull paint; to the period-design instruments perfectly located in an engraved-metal surround; to its Art Deco steering wheel; to the stunning deep-red leather upholstery, this is as perfect an execution of the Model 103 as exists anywhere.”