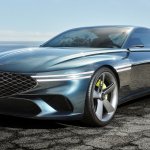 Genesis has unveiled its X Concept, which “presents Genesis’ sustainable luxury in the form of an EV-based high-performance GT coupe,” the automaker said.

“The car that we are unveiling today is a concept car that embodies the essential elements that Genesis pursues in its designs,” according to Jay Chang, global head of the Genesis brand, who was quoted in the company’s news release showcasing only its fifth concept car.

“The new concept car is a high-performance GT that maximizes use of the Two Lines design element that Genesis is known for,” the news release noted. “The Two Lines theme, which is applied throughout the interior and exterior, including electric charging devices, embodies the design language of future Genesis EV models.”

“The signature Two Lines theme and sustainable luxury will be blueprints for the futuristic designs and state-of-the-art technologies that Genesis seeks to adopt in its future models,” added SangYup Lee, head of Genesis design.

Genesis noted that the Two Lines represent technology and design.

The exterior features Two Lines-style headlamps and tail lamps that wrap around the sides of the car.

The interior of the concept features a scotch-brown driver’s seat in an otherwise green-blue cabin. To emphasize the car’s dynamic potential, seats have exposed-metal frames and 4-point occupant restraints.