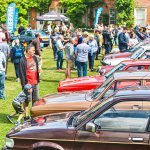 Although the setting is the historic 16-century Grimsthorpe Castle in Lincolnshire, UK, the cars expected July 31 for the 7th Hagerty Festival of the Unexceptional tend to be mundane, but that’s precisely the point for this Concours de l’Ordinaire.

This car show is not focused on the expensive or exotic, but on the vehicles that “were once a common sight but are not a rarity on UK roads.”

“Dust off your Datsuns, polish your Peugeots, and rev up those Reliants,” Hagerty said in its call for entries as the show returns after a year off because of the coronavirus pandemic.

Hagerty said it’s delighted that the world-famous Festival of the Unexceptional will return in 2021.

“Showcasing much-maligned and long-forgotten ‘ordinary’ classic cars and commercial vehicles of the late 1960s, ‘70s, ‘80s and ‘90s, Festival of the Unexceptional remains the only concours that applauds an Applause, believes in basic, makes a case for a Cavalier and fawns over an FSO. In keeping with the spirit of the event, guests are welcome to arrive in the latest supercar but are forewarned that an Ambassador will gain more privileges than an Aventador when it comes to being offered forward parking.”

The show sounds like a lot of fun, and for ordinary folks with ordinary cars that they have loved and maintained. Wonder when Hagerty will host a similar event on this side of the pond?

“Race, fast, exotic and eccentric” is how organizers of the Amelia Island Concours d’Elegance describe the two-stroke motorcycle class that will be featured at the 26th annual event May 23 in northeast Florida.

“For decades exotic two-stroke engines ruled Grand Prix and motocross racing until they were legislated out of existence. Two strokes were lightweights without the bulk of a valve train or separate lubrication system. Every stroke brought ignition. Simplicity was a core strength. So was power. And so was that hazy blue exhaust smoke.”

Among the two-stroke machines to be featured at the concours is a 1924 Scott Flying Squirrel, a water-cooled two-stroke twin; a DK-powered 50cc Victoria Avanti known as “the Tin Banana;” a 1974 Suzuki T500 that was among the bikes that brought the two-stroke into the American mainstream motorcycle marketplace; and the Devlin 428, a 2013 build by Devlin Hunt with an exotic hammered aluminum body and built to pre-1978 road racing-class specifications with a 67-horsepower engine based on a 1976 Yamaha RD400 two stroke.

The Mustang Club of America states its 45th anniversary gathering April 2-4 at the Road Atlanta racing circuit in Braselton, Georgia. The schedule includes car shows with judging and autocross, parade laps and even a high-performance driving event (helmets required) on the track.

The Ontario region of the Antique Automobile Club of America hosts its 50th annual AACA Automotive flea market and car show, scheduled for August 14-15 at the fairgrounds in Lindsay, Ontario, Canada. For more details, visit the region’s website.

The 42nd annual “General Motors on Display” car show is scheduled for June 2 from 9 a.m. until noon in Macungie Memorial Park in Macungie, Pennsylvania. The show, open to all GM vehicles, is staged by the Keystone State Chapter of the Pontiac-Oakland Club International. In addition to vehicles on display, the event includes a GM parts flea market.

The Le Mans Classic, one of Europe’s biggest vintage racing festivals, was canceled by the coronavirus pandemic in 2020 and has been canceled again for the same reason. The biennial event is now scheduled for July 2022.

“Due to the more than capricious changes in the constraints applied to large-scale events, Peter Auto and the Automobile Club de l’Ouest were forced to postpone once again the 10th edition of Le Mans Classic to the first or second weekend of July 2022,” organizers said.

“It is totally impossible to organize a miniature of the event, which normally welcomes 200,000 spectators,” they added of a reduced format.”

Although generally staged every other year, the organizers also plan at 2023 event to celebrate the centennial of the 24 Hours of Le Mans race.

Historic Sportscar Racing launches its 2021 season March 31 with the Spring Fling at Sebring International Raceway in central Florida, where a Wednesday through Saturday scheduled will allow competitors and spectators to head home for Easter Sunday.

Among the highlights of the entry list is the former No. 65 Kremer Porsche 934 which has been restored to its 1976 Le Mans livery by car owner Tom McGlynn and the 901 Shop. The car finished 19th overall at Le Mans with Bob Wollek, Didier Pironi and Marie-Claude Beaumont driving.

McGlynn took delivery of the car in 2018 in the orange Jagermeister livery it wore in its second Le Mans appearance in 1978 and ran it that way at the 2019 Monterey Motorsports Reunion.

The Spring Fling event also will feature four generations of cars that competed in the Ferrari Challenge competition, as well as former NASCAR champion Bill Elliott, who will be racing in a 2014 Chevrolet Camaro.

The post Festival of the Unexceptional returns in late July appeared first on ClassicCars.com Journal.