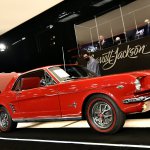 Barrett-Jackson exceeded $105 million in sales, including $5.8 million for charity, during its Scottsdale auction last week, despite a two-month delay and restricted access because of COVID.

Customarily held in January, the company’s hometown event produced sales of more than $95 million for 1,054 vehicles with a 100 percent sell-through rate, and led by Carroll Shelby’s own 1966 Shelby Cobra 427 Super Snake that went for $5.5 million – the same amount it sold for in 2007 at Barrett-Jackson.  All results except charity sales include auction fees.

Nine charity sales, which benefitted a number of organizations, were highlighted by the auctions of a number of first-edition and VIN 001 vehicles donated by automakers, including a pair of SUVs that sold for more than a million dollars each.

Charity auction sales have become signature features of Barrett-Jackson auctions, with all proceeds going to their respective causes. To date, Barrett-Jackson has helped raise more than $133 million for more than 130 local and national charitable organizations, the company says.

The auction also achieved $4.4 million for more than 1,000 pieces of automobilia, highlighted by the top sales of two Sinclair Oil pieces that each sold for $115,000: a 1964 New York World’s Fair coin-operated Mold-A-Rama machine that creates Dino the Dinosaur figurines and a 1960 porcelain animated neon sign.

“It was wonderful to be back among our friends and family in the collector car community,” Craig Jackson, Barrett-Jackson chief executive, said in a news release. “The pandemic challenged us all in different ways, which is why it was great to reconnect and celebrate this passion we all love so much. It’s also why we curated a quality docket that included some of the very best examples of collector cars.

“With so many auto shows and traditional events cancelled over the past year, we were thrilled to provide a stage for the world’s top automakers to showcase their latest vehicles. We also relished the chance to write history with the sale of the most VIN 001 and first-production vehicles ever offered at auction, which raised $5.8 million for charity.”

The Scottsdale auction was strictly restricted with pandemic protocols, with limited attendance, required masks, social distancing and hand-sanitizing stations.  One of the most-striking mitigations was the clear plexiglass enclosure around the main auctioneers’ podium.

The top 10 highest-selling vehicles at the Scottsdale auction, not including charity sales, were:

Barrett-Jackson’s next auction is scheduled June 17-19 at the West Hall of the Las Vegas Convention Center, a rescheduling of the company’s customary fall auction in Las Vegas.  On September 16-18, Barrett-Jackson will hold its inaugural Houston auction.