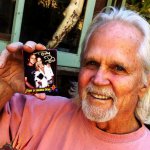 When they’re not at car shows, many Baby Boomers are reliving their childhoods on Saturday mornings watching reruns of television Westerns such as Gunsmoke, The Rifleman, Bonanza and Have Gun Will Travel.

Recently, while eating my morning bowl of Cheerios in front of the television set, I discovered that at 8 a.m. every weekday one of my favorite family sitcoms is on. Leave It to Beaver ran from 1957 to 1963.

The storyline followed a curious and often naïve boy Theodore “The Beaver” Cleaver, played by Jerry Mathers, and his adventures at home, school and around the neighborhood. Barbara Billingsley and Hugh Beaumont played his parents, with Tony Dow as The Beaver’s older brother, Wally.

Each episode ended with an important message that taught life lessons, and not just to the kids but to parents as well, and with a touch of humor.

Fast forward several decades and it turns out that while Tony Dow wasn’t the typical car guy, he was involved with cars throughout his acting career.

He also has had a long friendship with Fireball Tim Lawrence, a Hollywood concept artist responsible for designing more than 400 Hollywood movie cars, including Batmobile 1989 (designed while Fireball was a student at The Art Center College of Design), as well as cars seen in The Avengers, The Dukes of Hazzard, Starsky and Hutch, The Green Hornet and the Fast and the Furious.

One of Fireball’s current endeavors is publishing Kustom automotive (and sea life) coloring books and trading cards (www.fireballtim.com). Subjects of the coloring books include the likes of Gene Winfield, Gary Wales, Syd Mead and — Tony Dow.

The Tony Dow book, written by Tony and his wife Lauren and illustrated by Fireball Tim, covers everything from Leave It to Beaver to cars, sailing, and Dow’s work as a sculptor.

Boomers, myself among them, flocked to Autobooks-Aerobooks in Burbank, California, for a book signing session featuring the Dow, still humble and with his shy smile.

Among things we discovered was that Dow was an accomplished swimmer and at age 14 held five national records and also was the top-rated junior diver on the West Coast.

As the story goes, he landed the role of Wally pretty much by accident. The Beaver pilot has another teenager in the role, but that actor was maturing too quickly for the TV show. So old-time Hollywood producer Harry Akerman had a casting call that drew thousands of hopefuls.

He wasn’t satisfied with any of them, but knew Dow from another pilot project.

Dow got the “Wally” part almost by accident when the original pilot had cast some other kid as “Wally” but grew up too fast so an old time Hollywood producer, Harry Akerman knew Dow from a previous pilot, and offered him the role.

“I had almost not acting experience,” Dow said, “which was probably the best thing about me and was not affected by that whole Hollywood scene.”

While Leave It to Beaver was not a car-orientated series, there were many automotive experiences throughout the episodes, and future drag racing star “TV Tommy” Ivo played a character named Duke in a few episodes. (Book plug: Ivo wrote the forward to my book, Top Fuel Dragsters of the 1970s, which is available on Amazon.)

Dow told how as a youngster,“my buddy and I used to take the engine off his dad’s lawnmower and make these cool cars we’d drive around the neighborhood.”

“The writer of the show heard the story and wrote a script about it and even rented my car for the show,” Dow recalled.

Over the years, Dow owned a bunch of cars and in the show a 1958 Chevrolet Corvette and a 1957 Triumph TR3A made appearances as vehicles owned by members of The Barrons, the school car club.

Wally spends $220 for a 1953 Chevrolet in one episode and in another he bases his father’s 1963 Plymouth Fury.

The first car Dow bought in real life was a 1962 Chevrolet Corvair Spyder.

“I had the Chevy factory in Van Nuys paint it Midnight Blue with a black interior.”

In 1965 Dow sold the car to a prop man, Al, at Universal Studios. Two decades later, Al did a ground-up restoration of the car, installing a turbocharge spider engine with alcohol injection that boosted its horsepower to 245.

Al became ill in 2015 and passed the car on to his friend, Marty, but with instructions that if they could find Tony Dow, the car would go back to its original owner.

Dow’s eyes illuminates as he states,

“So after 50 years my first car has returned to my garage,” Dow said, his eyes illuminated as he starred ahead. “Its painted black now but the original plate is still on it with a frame that reads ‘“unsafe at any speed” — Ralph Nader’.”

After Leave It to Beaver, Dow appeared in other shows including The Love Boat, Knight Rider, Babylon, Quincy ME and Mod Squad. He event stared in a West Side Story production in Cleveland.

Dow eventually became a director and a visual effects supervisor working on movies including The New Lassie, Swamp Thing, Honey I Shrunk the Kids, and Babylon 5.

Dow was part of an artistic family and he and Lauren devote their time to creative projects, including Tony’s sculpture, with designs in burl wood and modern pieces in bronze.

Underscoring his artistic capabilities, Dow received a call one day several years ago from a Beverly Hills gallery owner informing the former childhood actor that one of his bronzes had been accepted in the Salon 2008, Carrousel du Louvre, Paris.

As it says in the subtitle to the Dow coloring book, “From ‘Leave It to Beaver’ to cool cars, sailing, animals & Sculpture… This is Tony Dow!”

The post ‘Leave It to Beaver’ actor’s first car comes back to him, 50 years later appeared first on ClassicCars.com Journal.