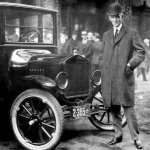 — That in the early 1920s, Henry Ford tried to get Great Britain to switch to left-hand drive?

— That in 1914, Ford, a man not necessarily known for his generosity, boosted the daily pay of assembly workers to $5 a day (a well-known fact); that raise was more than double the $2.34 they had been making.

— That in 1915, Benny Hucks, a captain in the Royal Flying Corps, modified a Model T with an elevated network of pipes and a chain drive so the car could be used to safely start the propellers of World War I-era aircraft without the need to put airmen at risk trying to spin those propellers by hand?

— That in 1924, a prototype vehicle featuring a Ford Model T chassis, a Dodge-built engine and an overhead valve head by the Chevrolet brothers was constructed with an eye on racing it in the Indianapolis 500?

Those insights — and many more — come from Chas Parker’s new book, Ford Model T: An Enthusiast’s Guide, written with a lot of help from Model T specialists Chris Barker and Neil Tuckett. What makes this book different, and also makes it delightful, is that it was written from a different sort of perspective, since the authors are British and have come to appreciate the car, as they say, from across the pond.

Ford kept the Model T in production for nearly 20 years, selling more than 15 million examples. But perhaps just as remarkable is the fact that around 50,000 of those vehicles are still being operated, “lovingly tended to by their owners and kept running through specialist suppliers. There is no shortage of spare parts,” Parker writes.

And apparently the British are among those lovingly tending to the Model Ts.

The book opens with “The Model T Story,” and then follows with dozens of pages on the vehicle’s anatomy, with scads of detailed engineering drawings and photographic details.

A variety of British owners are given opportunity to share their passion for their vehicles, and then there’s a chapter on the Model T as race car — including Indy and the 24 Hours of Le Mans. An ensuing chapter looks at the variety of variations of the vehicle — including its use on railroad tracks.

There’s a chapter on restoring a T and another on adventurous drives that were done in the day, and one that was attempted again in recent times.

As someone who lost some skin (but no broken bones!) crank-starting a Model T, I read the book with fascination, and enjoyed the foreign perspective on the car that put America on wheels.

After all, it was the Model T that put the rest of the world on wheels as well.

By Chas Parker, with Chris Barker and Neil Tuckett

The post Bookshelf: A British perspective on a historic American automobile appeared first on ClassicCars.com Journal.