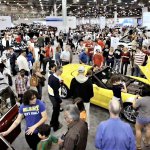 Barrett-Jackson continues to stir things up, announcing Wednesday that it was adding a Houston auction in September to its annual schedule of collector car events.

The Houston Auction will be held at the NRG Center, the city’s cavernous event facility, on September 16-18, according to the announcement from Barrett-Jackson.

“We’re incredibly excited to head out to Houston this fall for our first collector car auction in Texas,” Craig Jackson, chief executive of Barrett-Jackson, said in a news release. “Enthusiasts across the region, especially Texans, have a deep passion for collector cars.

“Only a few years ago, my search for the lost 1967 Ford Shelby EXP 500 prototype dubbed ‘Little Red’ led me to North Texas, where I found the fabled Mustang,” Jackson added, referring to the iconic Carroll Shelby car that he had restored and now resides in his private collection.

The NRG Center is one of four event facilities within the NRG Park, a 350-acre complex with 26,000 parking spaces.

“They say everything’s bigger in Texas, and that’s exactly what you can expect from our inaugural Houston Auction,” Steve Davis, president of Barrett-Jackson, said in the release. “With the sprawling NRG Park as our backdrop, our docket will be as wide and diverse as the state itself.”

Barrett-Jackson announced in February a change in dates and venue for its annual Las Vegas auction, held for the past 12 years in late September or early October at Mandalay Bay Resort, but moved to June 17-19 at the huge new West Hall of the Las Vegas Convention Center.

This week, Barrett-Jackson is holding its 50th annual Scottsdale auction at the WestWorld event center; the company’s signature hometown event was pushed back from January this year because of pandemic concerns.

Barrett-Jackson’s two other annual auctions – in Uncasville, Connecticut, and Palm Beach, Florida – were canceled for 2020 and there is no indication that they will be held during 2021; neither is listed as upcoming auctions on the company website, although the company has not said that they will not be happening.

There was no response from Barrett-Jackson on Wednesday to a request for information about the Connecticut and Florida sales.

For more information about Barrett-Jackson events, visit the auction website.