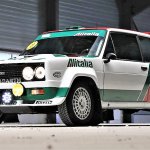 The Pick of the Day is an excellent example of an iconic 1970s rally car, a 1979 Fiat 131 built to Abarth specifications.

Of the competition cars of the 1970s and ‘80s, some of my all-time favorites were the rally cars. That era of rally racing was absolutely epic with practically every manufacturer in the world fielding a team.

Over the past few years, these vintage rally weapons have attained a serious cult status and prices have gone up dramatically, not just for original factory-prepared cars but for modern builds of vintage rally machines. Just take a look at the realized prices for the many 911 Safari cars that have been created in recent years.

It is expensive to build a car to the spec that existed in this era, and the parts needed to do so are both scarce and pricey.

The Aiken, South Carolina dealer advertising the car on ClassicCars.com refers to it as a stunning example in the “Alitalia” color scheme, and it’s ready for some rough-and-tumble run.

The car has been driven in rallies during the past few years, the seller notes, and the body does show some signs of that use, but that is what this car was built for.

I can think of few ways to have more fun on four wheels than what this car offers.  The asking price of $49,995 is not only a fraction of what this car likely cost to build, but about a quarter of the cost of a true factory-prepared period example.

The post Pick of the Day: 1979 Fiat 131 Abarth built as a vintage rally car appeared first on ClassicCars.com Journal.