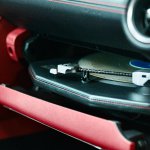 Those of a certain age may remember their parents or grandparents owning a mid-1950s Chrysler car equipped with the “Highway Hi-Fi,” an optional in-car music machine that played special 7-inch discs produced by Columbia Records. With fewer than 17 rpm, each record would play for an hour per side.

Well, as you likely know, vinyl records are back in a big way, and Lexus even has created a show car around them. Called the Lexus IS Wax Edition, the car has a turntable where the glove box usually is found and Lexus promises it plays “vinyl records while the car is in motion without missing a beat – even on a bumpy road.”

To showcase the prototype setup, Lexus shares a “Driven by Sound” video series, working with online music website Pitchfork and DJ MC Madlib and entertainer Kaytranada to produce a new double-single on vinyl.

The achievement, Lexus claims, gives “a whole new meaning to ‘taking it for a spin’.”

“This impressive fusion of music and cars was captured in a two-episode documentary series, ‘Driven by Sound,’ created in partnership with Pitchfork,” Lexus said in a news release. “Episode One offers a behind-the-scenes look into the creative process of Madlib and Kaytranada. Episode Two documents the creation of the in-dash turntable and reveals the Lexus IS Wax Edition.

“It features music from the highly anticipated release of the artists’ joint double-single. Vinyl Me, Please (VMP), a monthly record subscription club that curates and creates vinyl packages, will distribute the exclusive 7″ vinyl to select members as part of their subscription.

“When I make music, I usually do it in headphones, so I hear everything clear,” Madlib is quoted in the Lexus announcement. “And I take it to the car, test it out. Every time. That’s the big test. To have the turntable in a Lexus? That’s beyond.”

“When Lexus said they wanted to build this car, I didn’t think it was possible,” according to Kaytranada.“It was amazing to see and hear vinyl playing while cruising in a car.”

“With vinyl listening once again on the rise and the Lexus IS attracting drivers with a passion for authenticity and amazing experiences, creating an in-car turntable that works flawlessly with the vehicle in motion was a challenge worth pursuing,” Lexus noted, adding that it worked with SCPS, a custom fabrication studio in Los Angeles, to produce the in-car player that plays a full-size 12-inch record.

The sound is played through the 2021 Lexus IS’ Mark Levinson Premium surround-sound audio system, which has 17 speakers and 1,800 watts of power.

The post Lexus shows a new meaning for ‘take it for a spin’ appeared first on ClassicCars.com Journal.