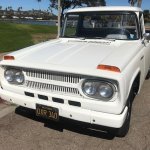 Ever see, or for that matter hear of the Toyota Stout? Neither had I until I saw one for sale on the ClassicCars.com Marketplace and immediately wanted to know more, enough more to make it the Pick of the Day.

For sale by its private owner in Solana Beach, California, is a 1966 Toyota Stout pickup truck, which the seller notes is “very rare” and in “great running condition.”

The truck is a 1/2-ton model with a 1900cc engine, 4-speed manual synchromesh transmission, and 6X5-foot Rhino-lined bed. The seller adds that it was recently painted, has new exhaust and tires, and wears California black plates.

All well and good, but what is the half-ton Toyota Stout? Wasn’t Toyota only making compact trucks (Hilux elsewhere, simply the Pickup here) in the 1960s?

Turns out the Hilux was known as the Stout Light in some markets. The Stout was Toyota’s larger pickup, and was a workhorse vehicle in Asian countries. Production began in 1954 and ran through the 1980s.

The Stout for sale on ClassicCars.com is part of the second generation, vehicles from 1960 through 1978. It was powered by a 1,453cc or 1,897cc 4-cylinder engine, featured dual headlamps on either side of the grille with parking lights mounted in raised sections of the hood, and it had a slightly larger cabin designed to please export-market buyers. It also was available in right- or left-hand driven configurations, depending on local market regulations.

A few apparently were sold in North America in the late 1960s, and it turns out that Toyota featured one from its own collection, one with the 1,900cc 85-horsepower engine, in its display at the 2016 SEMA Show.

To view this one on ClassicCars.com, see Pick of the Day.

The post Pick of the Day: A Stout Toyota truck appeared first on ClassicCars.com Journal.