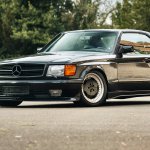 Bonhams MPH division staged its first live and online auction of 2021 this past weekend with its March Sale at the Bicester Heritage site in England. The auction house reported an 83 percent sell-through rate and noted that the top-10 lots each achieved or exceeded pre-sale estimated values.

An overall total sales figure was not announced for the sale by Bonhams grassroots-oriented MPH division. The auction docket included 81 lots.

“This has been a very good start to 2021 for Bonhams MPH,” Ron Hubbard, head of the auction company’s MPH division, is quoted in the post-sale news release. “Although the country is in lockdown, the classic and collector’s car market it still active and our live and online sale format has once again proved successful.

“We are particularly pleased with the global reach achieved,” he added. “We had bidders from the Eurozone, Canada and the USA, where the AMG found a new home.”

Among the most unusual offerings on the docket was a 1973 Jaguar XJC prototype offered as a “project requiring final completion.”  The car was displayed at the 1973 London Motor Show to preview the nearly 10,000 pillarless XJ coupes that would be produced from 1975-1978. It was later used as a press demonstration car and subsequently was commissioned for a restoration that was not completed. The car sold at the auction for £ 16,875 (US$ 23,397).

Bonhams next MPH auction at Bicester Heritage is scheduled for May 22, with another December 11.  Bonhams MPH division also has a 2-day sale set for September 3-4 at the National Motor Museum at Beaulieu.

The next auction scheduled for Bonhams motor car division is the “Supercars on Sunset” sale April 10 at the auction house’s Los Angeles facilities.